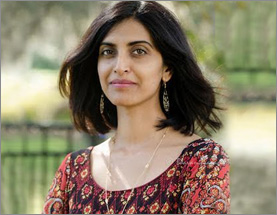 Professor Aditi Uday Gurkar asks why the aging process produces such disparate results under the same chronology for different people.

Aditi Uday Gurkar is a principal investigator and an assistant professor of medicine in the Division of Geriatric Medicine at the University of Pittsburgh. Growing up with her grandparents gave her an early view of the aging process, but the difference between each grandparent's health and strength struck her most of all.

This question of why people age so differently drives her research. She explains the causes of DNA damage and mechanisms of DNA repairing, and adds that her lab's focus is on how cells respond to the damage. They believe they've found those responses are integral to different levels of health as one ages.

It's estimated that one cell will undergo 70,000 lesions or damage on any particular day. She explains to listeners that there are many causes of DNA damage, such as sun exposure and resulting UV radiation. The DNA repairing signals kick in after the polymerase finds a lesion too big for its pocket as it reads the DNA during copying and drops off. She explains the different types of repairs in detail and that an over-activation of repairs can lead to a cell responding as if it is in constant stress, which drives aging.

The goal of her research is to understand how to intervene and modulate how the cell responds, especially in reference to its metabolism. She describes how their work with model organisms has shown promise with such modulations and also tells listeners about other studies, future goals, and next steps.