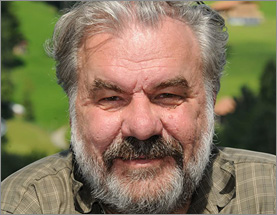 Holding a PhD in physical biology, Carl Johan Calleman is also a lifelong scholar of macrocosmic quantum theory and has written several books about it. He talks about his latest in this podcast, explaining its basics and explanations for how civilization has progressed through a series of cosmic shifts or waves. While some link psychedelics and depression, Calleman explores the ability of psychedelics to change one's mental state to a different geometry, more open to the movement from one wave to the next.

He explains that this is an all-encompassing theory about the evolution of the universe and all its aspects, not just physical. The theory holds that we're all part of a cosmic plan with a quantum field that underlies everything. He describes Mayan connections such as the wave pattern discovered by the Mayans and how this pattern reveals itself in the evolution of civilizations.

He connects this with microscopic phenomena like centromere organelles in our cells to the nine levels of Mayan pyramids. Finally, he goes through the mechanics of this theory in more detail and adds that we are in the ninth and final wave and what that means.

For more, find his latest book, Quantum Science of Psychedelics: The Pineal Gland, Multidimensional Reality, and Mayan Cosmology, for sale through most venues, and see his website: calleman.com.