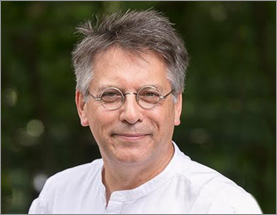 Professor Graham Hatfull studies bacteriophages in the human body; these are viruses that infect bacteria. Interested in both "the exploration and exploitation of these" bacteriophages infecting bacteria, he explains

Graham Hatfull is the Eberly Family Professor of Biotechnology in the Department of Biological Sciences at the University of Pittsburgh and an HHMI Professor. He tells listeners about the basics and the complexities of phages and potential therapies that might utilize them.

Mycobacterium tuberculosis, which is responsible for the symptoms and spread of tuberculosis. Tuberculosis causes around 1.7 billion deaths a year.

Studying the phages that infect this group of mycobacterium helps understand such pathogens as well as potential treatments. In order to study these phages, his lab uses bacterium related to these more dangerous bacteria as safer surrogates. This work puts us them a good position to figure out which phages infect TB and which ones don't. He also describes phage biology and coevolution with bacteria, which has led to a complex relationship.

For example, he discusses phages that are "temperate," and what that means in relationship to bacteria development. Finally, he talks about a successful case study in which they were able to use a cocktail of phages to successfully kill a particular strain of