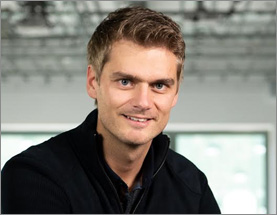 Co-Founder and CEO Sebastian Weidt tells listeners about exceptional advances his company has made and challenges still to be met.

Universal Quantum aims to build a new kind of quantum computer, says CEO Sebastian Weidt. Quantum computing's impact on society stems from the ability to solve problems contemporary computers could never tackle. In this podcast, he explains how they've developed a number of technologies to get closer to this goal of using the advanced capabilities and applications of quantum computers.

For example, he explains how they use trapped ions to form cubits, which are more lenient with temperature. This also enables longer coherence time. He adds that they use microwave radiation to manipulate the atom states and ions and explains the advantages of microwave radiation over other techniques like lasers. He describes more of how this technology works and how they've addressed some of the general problems quantum computing presents.

Universal Quantum is tied to a program at the University of Sussex, where a number of prototypes exist, and the company is able to integrate their research. Currently, they are working on engineering challenges that have made scaling to larger systems difficult. He says they've gotten a handle on some good innovations that will allow their first machines to utilize numbers of cubits not seen before. A significant additional challenge involves integration. Therefore they're developing custom chips that can be connected.

He discusses algorithm work as well and says one of the impacts he's most excited about involves quantum computing applications for the pharmaceutical space, thereby allowing tremendous progress in chemical reaction problem-solving.