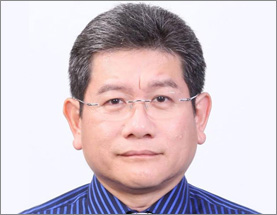 Dr. Fong Mun Yik is a professor in the Department of Parasitology under the Faculty of Medicine at the University of Malaya. He's been working with this parasite that was previously only prevalent in a few species of monkeys as its reservoir host; however, occasions where humans have been infected have been on the rise in the last decade or so.

Still transmitted by mosquito, as is the case with all malarial types of parasitic diseases, this cross-infection with monkeys is most likely due to the increased proximity of humans and the long-tailed macaque monkey species in Malaysia.

He explains that this monkey malaria, for the past 100 years, has been considered to only infect three monkey species, including the long-tailed macaque. It was therefore not on the list of concerns for human parasitic diseases until recently. Human malaria infections from P. malariae had been eliminated in Malaysia due to programs from the government that controlled the environment.

However, he explains that it is all but impossible to eliminate these monkey populations. He explains efforts to control the mosquito population instead as well as efforts to develop a vaccine based on genetic sequencing efforts.

For more, see research gate and pub med for his journal articles.