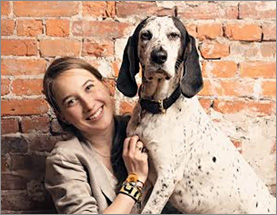 Courtney Sexton is a PhD student researching what we can learn from other species about our own and how to better interact with animals that share our habitat, like dogs. She's especially interested in the evolution of nonverbal communication.

In this podcast, she discusses

Courtney Sexton is a PhD student with the Center for the Advanced Study of Human Paleobiology at The George Washington University. She describes for listeners the different forms of communication throughout the animal kingdom, including among human animals.

She adds that an interesting aspect of this involves human-dog coevolution, and studying the relationship may lead to some dog behaviors explained. In fact, dogs are unique in that they've adapted to communicate with people almost as well as among themselves. Humans and dogs have been cohabitating for roughly 30,000 years and dog social behavior has some similar patterns with humans; she points to paired mating systems exhibited by dogs and wolves in the paleo hunter-gatherer era as one example.

Interestingly, dogs have gotten better at interpreting our signals than vice-versa. There are many examples of humans simplifying the understanding of dog body language when something such as tail wagging can signify a gamut of emotions. Courtney also explains that dogs pick up a great deal of information from our own facial expressions.

She describes her current research comparing fascial muscle development in dogs with and without hair coloring markings that exaggerate certain expressions. This stems from a similar study done on primates. She adds that researchers are struggling to find dogs to observe because of the pandemic shut downs and points listeners to resources, including her own Primate Genomics Lab, if they are interested in participating in video studies with their dogs.