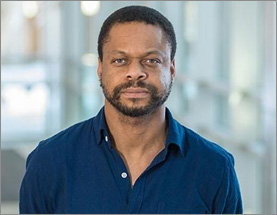 Dr. Reid specializes in host pathogen interactions studies such as investigating the chikungunya virus infection and Ebola virus microbiology. A returning guest, he and Richard discuss all things virus in this episode as Dr. Reid will contribute to Richard's upcoming book on viruses.

St. Patrick Reid is an assistant professor in the Pathology and Microbiology Department in the University Of Nebraska Medical Center College Of Medicine.

In a previous podcast, he and Richard discuss chikungunya diagnosis and pathology and Ebola virus symptoms and behavior. He begins this discussion explaining his journey into the field, which includes exciting postdoc work in France on Ebola. Now his researcher involves host pathogen interactions and he's particularly interested in different host proteins a virus has to recruit to replicate.

The conversation takes a turn into exploring what scientists have assumed about viruses compared to recent discoveries that may take that knowledge in new directions. For example, he talks about ancient phage discoveries in glacial bacteria and phage-bacteria coevolution. He describes an interest in how viruses that infect bacteria allow those bacteria to live in a community of other bacterium. The viruses actually play a role in enabling those bacteria to survive.

He discusses numerous other virus characteristics and implications, from DNA versus RNA viruses and what that dictates regarding habits like latency. He also addresses when that understanding changes with new discoveries, such as finding Ebola virus in chimps months after infection. They also talk a little virus philosophy and cover topics like what enables virus entry into cells and how tropism works.