A Revolution in Cancer and Evolutionary Biology with James Shapiro 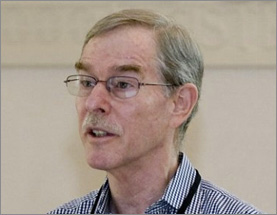 This podcast brings cutting edge theory to standard, everyday cancer treatment, calling for a new approach. Professor and author James Shapiro is speaking about evolution and cancer at the Cancer & Evolution Symposium in October.

Lucky listeners get a preview of his revolutionary ideas in this podcast where he connects lessons from cancer biology to evolutionary biology. He applies those ideas to a push for better cancer therapy treatment through an effective combination of big idea shifts with specific examples.

Listeners will finish this enlightening podcast with a better understanding of

James Shapiro is a professor of Biochemistry and Molecular Biology at the University of Chicago and author of Evolution: A View from the 21st Century. Cancer is an evolutionary disease, he says. Think about it: each stage follows evolutionary steps, from a benign cancer cell, to a malignant cancer cell, then a metastasizing cell, and eventually to cellular diversification and resistance to all kinds of agents. This tremendous ability to diversify so rapidly caught his attention and it seemed worthy to look at what cancer's ability for rapid change implied about evolution.

He then sets the stage for listeners by describing the connection between cell damage and "insults" to the beginnings of cancer. He discusses the role of events like chromothripsis (chromosome shattering) and polyploidy in cancer development and connects them with earth-shattering events like asteroid collusions that resulted in mass extinctions. These events on earth were followed by rapid evolution and new organism development. Similarly, cancer leaps ahead into tremendous heterogeneity and diversification as it progresses.

He then makes these ideas applicable: cancer treatment needs to stop this rapid evolution capability. This is the main goal of the symposium—to address cancer in a different way because it adapts and rapidly evolves as it reacts to present treatments. He gives examples of how some oncologists are attempting this already, using "adaptive" therapy where they tone chemotherapy down to try to avoid triggering the evolution. He also emphasizes that cancer can help evolutionary biologists better understand evolution.

For more about the symposium, see cancerevolution.org.