On the Hazy Border Between the Living and Nonliving 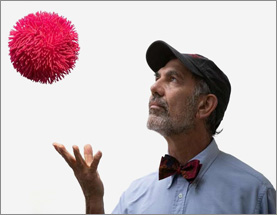 Life or death is a false dichotomy—at least when it comes to viruses. Robert Siegel posits that viruses exist somewhere on the hazy border between things that are and aren’t alive.

He sums it up uniquely in a short stanza:

“A virus has a structure giving it properties that lie between
Inanimate and truly living
Less than cell, but more than gene.”

Siegel is a professor in the Stanford University Microbiology and Immunology Department, and has an extensive background as a teacher and researcher. He entered the field of virology and biological studies during an exciting time, just after viruses were sequenced.

Since 1981, he’s been teaching a course on human viruses, which makes him a great resource for Richard Jacobs’s book on viruses. The many topics explored include the three primary ways of defining life (plus a bonus definition), why the incubation period differs from virus to virus, for what reason viruses might use quorum sensing or coordinate action, treatments that are aimed at viral proteins, such as those of hepatitis C, viruses as therapeutics and tools for diagnosis, and more.