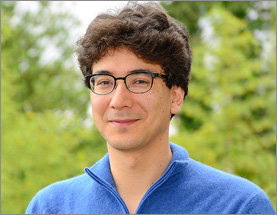 It all starts with an explosion. Imaging tech's latest advancement involves nanodiamond particles created from a shockwave's pressure and temperature. Scientists are finding ways to put these tiny formations to use as sensors inside cells.

Dr. Takuya F. Segawa is the Branco Weiss Fellow of the Society in Science in the ETH Zurich Laboratory for Solid State Physics. He is charged with finding better ways to investigate biomolecules inside cells. This led him to connect with a group in Japan that works with nanodiamonds. Why do scientists need a different way into cells?

Dr. Segawa answers with a cogent explanation of the limits of magnetic resonance spectroscopy physics and how MRI machines work. The gist is that they lack sensitivity to give scientists the best information. He explains that this new nanodiamond won't necessarily replace clinical MRI diagnostics, but it has tremendous potential to make a difference in lab work.

Here's how it works: about 25 years ago, a German scientist discovered that a crystal structure with a specific defect, a missing carbon atom, causes an electron spin and produces fluorescent light. Further study showed that manipulating the spin enables different light frequency emissions and leads to a fine-tuned sensitivity. Scientists then put this same defect in a nanodiamond, enabling a nanoparticle that can be used like an MRI system but with increased sensitivity.

In addition, the magnetic resonance signal changes if it's met with a magnetic field. Therefore, two signals can split and provide information on temperature and position by using the orientation of this magnetic field in relation to the nanodiamond. He explains how scientists might use this amazing technique in lab work and how close the industry is to gaining larger production needs.