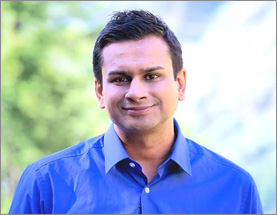 "Necessity is the birthplace of all creativity," says Ashok Gupta. He describes how his own chronic fatigue experience lead to the life-changing practices he now teaches others. He's dedicated his time to supporting people with Myalgic Encephalomyelitis (ME) and Chronic Fatigue Syndrome (CFS) and similar issues like fibromyalgia treatment.

Listen in as he explains

Speaker, filmmaker, and health practitioner Ashok Gupta is Program Clinic Director with The Gupta Program. As an undergraduate at Cambridge University, he suffered a stomach bug that spiraled him into ME/CFS. It was "like a brick wall in front of him," he says, surrounded by professionals telling him there was nothing he could do to feel better and improve.

After some research, he understood that there is an array of modern chronic conditions that are misunderstood, and mainstream medicine doesn't offer reliable solutions. He brought his research together and formed his own treatment program. Twenty years later and healthy, he's made it his work to effectively help others with ME/CFS and other similar issues like fibromyalgia exercises, chemical and mold sensitives, and MCAS.

His program addresses what they call NICS: Neuro (has its birthplace in nervous system), Immune (aspects of immune system over-triggered), Conditioned (learnt action in brain as defensive response), and Syndrome (each patient has unique collection of symptoms). He likens the brain conditioning response in these modern illnesses to PTSD. An initial illness causes an over-reaction of the amygdala and this over-reaction is then triggered in other circumstances, activating the nervous and immune system.

Their therapy involves teaching the brain that the body is no longer threatened, breaking the vicious cycle of the physiological response and reinforcements. Their main brain training technique is a seven-step technique with additional supporting methods. Lucky listeners can get a glimpse of his method as he takes listeners through a sample exercise called the "4S Technique." Listen in for peaceful and encouraging chronic illness motivation.

For more about his program, see guptaprogram.com.