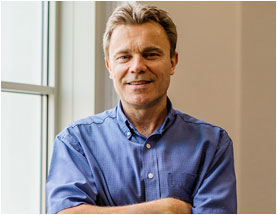 The tangle of online social media sights provided one researcher with a new direction for studying the physics of systems. He and multi-disciplinary colleagues have applied complex systems and data science to the dynamics of online group trends, trying to uncover better ways for engaging with information.

Neil Johnson is a professor of physics at George Washington University. He's spent his career studying the surprising things that happen when you combine objects. For example, he describes all the ways water molecules can have huge impacts under different conditions just by putting them together: ice skating, the titanic wreck, bubbles emitting from boiling. "When something is collected," he says, "things happen that you would never predict."

While his early studies involved excitons, which are collections of positive and negative particles, he migrated to other collections and eventually to data science real-world applications. He researched the formation of online extremism as seen by Isis communities combining and separating, like gears and wheels, impacting each other in various ways, which became a type of crime network analysis.

But he and his colleagues are working on possibly the most complex and hard-to-pin-down collection yet: social media groupings that form opinions on platforms like Facebook. They're taking on these data science real-time projects from a physicist's perspective of force and reaction. What are the tipping forces? How do sudden shifts evolve?

The competition between three essential forces interests them: each individual's internal compass, some external field like news sources, and local interactions with other objects within one's community such as neighbors. "You can't win any misinformation battle without a map of the battlefield," he adds. By understanding how forces exert pressures and having a map with the dynamics better evaluated, our information sharing methods and means can hopefully improve.