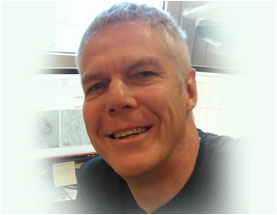 The rabies virus kills at least 60,000 people a year, worldwide. Because it is far more prevalent in lower economic status countries, it doesn't receive adequate funding for better vaccines or treatment. Researchers like Yves Gaudin are trying to change this. He works on understanding the mechanisms of rhabdovirus transmission.

First the rhabdovirus causes a particular entry process and requires a polymerase for infection: the glycoprotein, which makes a spike around the virion, recognizes the cell receptor and attaches. This triggers endocytoses and an eventual fusion event allows the viral genome and polymerase is to be released into the cytoplasm. The polymerase immediately copies that genome into an mRNA, which then hijacks the cellular machinery. The polymerase presence is vital to infection—without it, the viral particle would be inert, so targeting that polymerase offers one attack possiblity.

Second, his lab has characterized the chemical nature of viral factory itself. It is distinguished by liquid phase separation—it is housed inside a compartment that separates it, like oil in water, from the cell cytoplasm. The interaction between this factory and our innate immune system spreads the infection, using the pathway to the synthesis of interferon, and so on.

In the section entitled additional information, listeners can find the movies: https://www.nature.com/articles/s41467-017-00102-9#additional-information