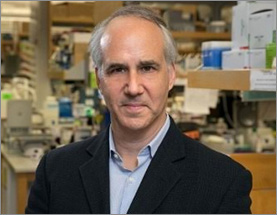 Dr. Geschwind is the Gordon and Virginia MacDonald Distinguished Professor of Human Genetics, Neurology and Psychiatry at UCLA. In his capacity as Senior Associate Dean and Associate Vice Chancellor of Precision Health, he leads the Institute for Precision Health (IPH) at UCLA, where he oversees campus precision health initiatives. In his laboratory, his group has pioneered the application of systems biology methods in neurologic and psychiatric disease, with a focus on autism spectrum disorders (ASD) and neurodegenerative conditions. Dr. Geschwind is a pioneer in the transcriptomic and functional genomic analyses of the nervous system.

His laboratory showed that gene co-expression has a reproducible network structure that can be used to understand neurobiological mechanisms in health and disease. He led the first studies to define the molecular pathology of autism and several other major psychiatric disorders, and has made major contributions to defining the genetic basis of autism. He demonstrated the utility of using gene network approaches to discover new pathways involved in neurodegeneration and new approaches to facilitate neural regeneration.

More recently, his laboratory demonstrated how knowledge of 3-dimensional chromatin structure can be used to understand the functional impact of human genetic variation. Dr. Geschwind has trained over 70 graduate students and post-doctoral research fellows, and is among the highest cited scientists in neurology, neuroscience and genetics (H index > 140). In addition to serving on several scientific advisory boards, including the Faculty of 1000 Medicine, the Scientific Advisory Board for the Allen Institute for Brain Science, the NIMH Advisory Council and the NIH Council of Councils, he currently serves on the editorial boards of the journals Cell, Neuron and Science. He has received several awards for his laboratory’s work is an elected Member of the American Association of Physicians and the National Academy of Medicine.

What can big data and genomics offer the individual regarding medical treatment? Dr. Daniel Geschwind is here to explain exome sequencing data analysis as well as how this field might expand and progress.

Dr. Daniel Geschwind is the Gordon and Virginia MacDonald Distinguished Professor in Neurology, Psychiatry, and Human Genetics; the Senior Associate Dean and Associate Vice Chancellor for Precision Health at UCLA; and the director of the Center for Autism Research and Treatment at the Semel Institute at UCLA David Geffen School of Medicine.

He opens up the world of genomics for listeners, explaining why an exome sequencing test is the center of precision medicine currently. He explains how the exome is composed of the 3% of your genome that actually codes for protein sequences. What's the rest of the genome up to? Well, scientists believe that remainder of your genome is busy regulating those sequences, determining levels and turning gene expressions on and off.

However, he thinks this will soon change. As the exome sequencing project continues and our knowledge accumulates, the benefits will increase from whole genome sequencing. The costs are likely to drop as well. Once it gets inexpensive enough and we have sequenced hundreds of millions of patients with a variety of disorders, we will have much better predictive power.