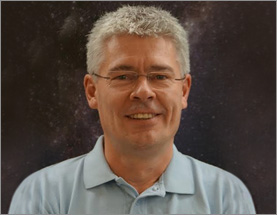 How many stars in the sky? Gaia astronomer Timo Prusti is more qualified than most to posit an answer. He helps manage the project undertaken by the ESA mission space lab called Gaia—to measure the position of almost 2 million stars—and talks about the far-reaching implications and space exploration benefits.

Timo Prusti is a project scientist with the European Space Agency (ESA) on the Gaia team and takes listeners on a ride through the stars in the universe. The Gaia satellite is positioned about 1.5 million kilometers away from the earth, collecting data to help Prusti and his colleagues measure star positions.

The distance is tricky to calculate, but they use parallaxes: think of putting your finger in front of your eye and closing and opening the other eye such that your finger seems to jump. Gaia measures the star location from one side of the sun and then half a year later from the other side of the sun; this “jump” measurement is plugged in to their equation. These data points are collected 24 hours a day and sent to their labs on earth.

What’s been useful about this information? Well, Prusti explains how other scientists can use this for fundamental research in numerous fields. For example, scientists were able to determine the atmosphere of Triton, a moon of Neptune, based on the shadow that hit the earth when it passed between the earth and a star they had measured. Gaia has completed what’s called the “nominal mission,” but is continuing with further work and measurements. They’re hoping to keep it going until early 2025 and use the motions of stars to open up a totally new area of investigation—to understand our own Milky Way galaxy: its structure, how it was born, and what is its future.