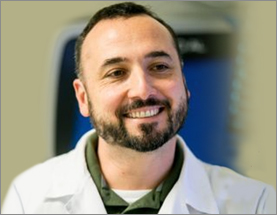 What do tumor cells use for food? Researcher Christos Chinopoulos discusses a brand new technology called Reverse Phase Protein Array (RPPA) that quantifies protein expressions and determines what pathways are important for cancer metabolism. By viewing cancer as a metabolic disease, it may provide tools to inhibit those pathways.

Christos Chinopoulos is an associate professor with Semmelweis University and the project manager of their RPPA facility. He gives listeners a glimpse of this exciting technique, likening it to “western blotting on steroids.” Thus far they have been able to semi quantify the expression of several hundreds of proteins from thousands of samples. These samples include solid tumor tissue and healthy tissue as a control. Several proteins on a pathway can be examined at the same time. This gives researchers an idea if that particular pathway is important in cancer metabolism.

This precise technology is along the lines of searches for new cancer treatments like a mitochondria cancer cure and caloric restriction and cancer, but at the pathway level. Chinopoulos believes that by investigating these metabolic pathways, which are a small part of the glutamine metabolism pathway, they can identify what is critical for tumor survival.

They aim to quantify the expression of proteins participating in that particular pathway of glutamine metabolism, which could lead to ways to inhibit those pathways and starve the cancer cells. He hopes to present concrete data over the next year.