Bacteriophage Therapy: How Canine Skin Infection Research Could Find the Answer to the Growing Problem of Antibiotic Resistant Bacteria 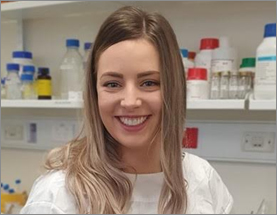 Can recurring skin infections in dogs be effectively treated without the use of antibiotics? Stephanie Lynch, Ph.D. Researcher at La Trobe University in Melbourne, is working on a potentially groundbreaking treatment for canine pyoderma known as bacteriophage therapy.

Listen to learn more about:

Canine pyoderma is one of the most common skin diseases in dogs. Unfortunately, it can also be one of the most persistent. The standard treatment for pyoderma is a month-long course of systematic antibiotics, with or without the addition of routine bathing with a medicated shampoo.

Unfortunately, some strains of the bacteria that cause pyoderma have become antibiotic resistant over the years, creating a big, red, itchy problem for some unlucky dogs and their owners.

Bacteriophages are viruses that can infect bacteria cells. Once they have infected their bacterial host, they take over those cells and prompt the bacteria to begin to produce viral components rather than bacterial components. The bacteriophages are then capable of forcing their way out of the bacterium, in a process known as lysis, through which they may retain some of the host’s DNA information.

Stephanie hopes to find an answer to the difficult question of how to treat dogs with antibiotic resistant skin infections somewhere in the bacteriophages life cycle. Her research on isolating bacteriophages could pave the way to treating more uncommon bacterial skin infections in dogs, other animals, and even humans without relying upon antibiotics.