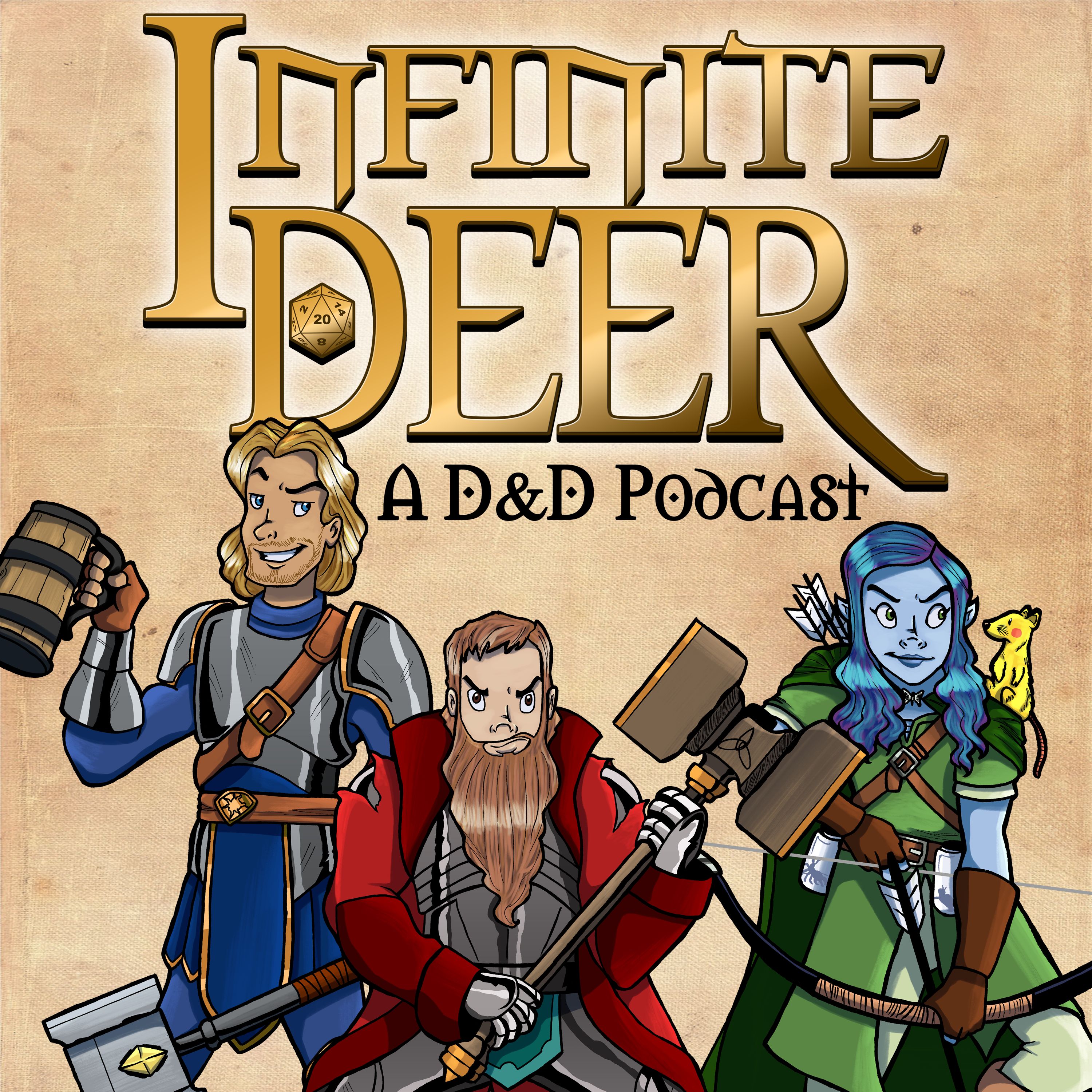 Infinite Deer is an actual-play homebrew D&D 5e campaign podcast – find us on http://bit.ly/infinitedeer Sam Went is Dungeon Master, Lachlan is Chad Blazer, Merry is Merrielle Blazer, George is Bo Vine and Alex is the Morality Ghost/ Rules Monster. Last Time on Infinite Deer While trapped in a dungeon The Merry Few learn that the magical group that they’ve been helping, The Ancient Circle, are planning to destroy the city of Karusa. They attempt to escape. Story The Merry Few have difficulty navigating their way through the Kobold dungeon, particularly with Bo’s pet cow Angela Mer-cow. At first, Chad steps on a pressure pad that activated arrows that shot down the only corridor and was hit. Merrielle manages to dodge them, but Bo and Angela Mer-cow did not fare well. Still taking the lead, Chad then falls into a pit. As Bo prepares to ride Angela Mer-cow as she gingerly tries to step around the pit, Merrielle speaks in moos in an attempt to inspire her. Unsurprisingly, this does not work, and Bo and Angela fall in the pit on top of Chad, injuring Chad further and killing Bo’s last pet. Once Chad and Bo are safely out of the pit they eavesdrop on a conversation nearby between kobolds and a familiar wizard voice. The wizard convinces the kobolds to ‘keep them locked up’ while he attends duties. Merrielle reveals to Chad that the wizard is in fact a wizard and he begins to bring justice to magic users. How will our heroes defeat their former close friend the wizard with a goatee? Will the Merry Few foil The Ancient Circle and save Kurusa? What is the fate of Azure? Find out next week in the season finale of Infinite Deer: A Dungeons and Dragons Podcast. Quotes Ghost: Why are you taking a cow through a dungeon?? *** Chad: These guys are like pringles of killing stuff Bo: Once ya pop you just can’t stop! Also, I can’t fit my fist into them Find us on social media! Facebook:@infinitedeer (https://www.facebook.com/infinitedeer/) Twitter: @infinite_deer (https://twitter.com/infinite_deer) Instagram : @infinite_deer (https://www.instagram.com/infinite_deer/) Wordpress: http://infinitedeer.wordpress.com Tumblr: https://infinitedeerpodcast.tumblr.com/ Credits and Acknowledgements Equipment- Infinite deer was recorded using a Zoom H2N microphone in Ms Keech & Mr Went’s shed. The editing software used is Audacity. We have many people to thank who have made Infinite Deer possible: Sam Went – Writer/ Dungeon Master/ Producer Alex Tansley –Assistant writer/Audio technician/ Morality Ghost / Producer Amy Larham – Producer/Editor/Music Merry Martyn – Cast: Merrielle Blazer/ Producer Lachlan Bennett – Cast: Chad Blazer /Web design George Hughes – Cast: Bo Vine Hugh Ingamells – Artist Dag Simeon-Corbett – Outro voice Wizards of the Coast – Amazing minds behind Dungeons and Dragons that made our silly little lives have purpose. A huge thank you to our fellow nerdy friends and family for support. And finally, thank you to our fans and listeners! If you like the Infinite Deer podcast please don’t forget to rate, review, and subscribe to future episodes. Infinite Deer would like to remind our valued listeners and subscribers that cows are people too and they should be respected. The moral ghost unreservedly apologies for our treatment of them; giving them badly thought out puns instead of a respectable cow name is unacceptable. By way of an apology the moral ghost will personally reply to any email sent to [email protected] that has the subject line ‘Cow-naming Accowntability Now!’. The reply will contain at least one (1) photo of a happy cow who has a proper cow name.
Download episode Share Share