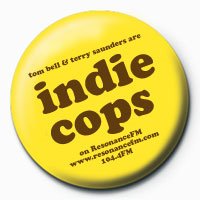 Feb 14 2008
The big last final ever Indie Cops episode Part II of the grand finale sees all the various seemingly random bits of the whole series inexplicably weaved together as tom and terry finally work out who did it and why. But will they save they day? Will Jarvis the cat ever be able to hunt a sausage? And will they wrap up the plot in time? Yes , No, Yes. But maybe not in that order... thanks for listening folksstay loose x

Starlings of the Slipstream (Series 2, Episode 10)

Feb 13 2008
The big big big indie cops finale (part 1). Terry and Tom are stranded on the English Channel - Britain has been mysteriously closed, and France are sick of them. So the boys row across to find out exactly what the heck is going on To Be Continued...

Dec 06 2007
The boys hunt for a bargain, and Jarvis gets angry with their capitalist ways at the boot sale. But it's all saved with some blur puns.

Feb 13 2008
The thrilling, yet actually quite meandering and then not really quite so thrilling, climax to the adventure in the castle.

Nov 19 2007
The indie cops head to an old castle (eventually) where they find some celebrities at it (fighting, that is)

Nov 08 2007
Here is another of those indie cops episodes, but this time with a nonsensical introduction. Basically, as we were coming to an end of hour 30 mins on resonance we were told we had another 30 mins, so we faffed and panicked and got ratty and hungry. This is a half hour edited down version of the hour long sprawl. In this jolly jaunt we save a hedgehog and terry shows off his marvellous acting skills.

Indie Cops: If You Shoot The Head You Kill The Ghoul (Series 2, Episode 4)

Indie Cops - Ease Your Feet In The Sea (Series 2, Episode 3)

Oct 20 2007
Terry puts Tom into a coma with some seaside vinegar, then, when he's better they find an underground lair and a lot of donkeys.

Oct 20 2007
The Indie Cops are on the road, with their big new overdraft and a mobile Dental Records. They go to the most suspicious charity shop ever and find a host of bad accents.

Oct 19 2007
The boys are back. But since the end of the last series they have split up... Terry is working for the man and Tom has his own mobile iron foundry. Will anything bring them back together?

Episode 11 - There is a Light That Never Goes Out

Sep 05 2007
The final part of the two part finale what ends the first series of indie cops They both survive in the end, sorry to ruin any mild peril you might have otherwise experienced

Episode 6 - We Will Become Silhouettes

Sep 05 2007
It should have been a straight forward trip to the Indie Bank for Terry and Tom, but when terror strikes, their fear of bombs in enclosed spaces is tested to its very limits... Just who is behind this dastardly plot? Why is someone trying to build a lighthouse on Centrepoint? Will Terry's ex-wife and kids ever come back to him? Would Jack Bauer be quite as good in 24 if he too was wearing converse and cords? Will their sound effects adequately cover the most action-packed episode of Indie Cops ever? How are you? Find out for yourselves in another thrilling installment of... Indie Cops! (blurb written by Tom Bell, but he has forgotten his login... thereby keeping with his character what he plays in the radio series called indie cops)

Episode 5 - Judy and the Dream of Horses

Episode 4 - The Female of the Species

Sep 05 2007
The Indiecops hijack Resonance FM's popular show "Democracy Now, but it's ok, they were allowed to - and now they have a theme tune, so democracy won't mind. This week Tom and Terry fall in love with a femme fatale... and a woman

Episode 3 - Have You Fed The Fish?

Sep 05 2007
This episode was first broadcast way back in about April (ish) of 2007. Terry and Tom reminisce about their adventures in an aquarium and bloody uncover the great Cod Liver Oil plot of the year 2000

Episode 2 - Race For The Prize

Sep 05 2007
The first episode proper, despite it's crazy Episode 2 moniker is here... Back in 2001, it's a real treasure hunt as the indie cops are sent around the houses by an evil indie villain hellbent on converting the world. Can the indie cops find him and stop him? Or will they just sniff some envelopes?
No review available yet...