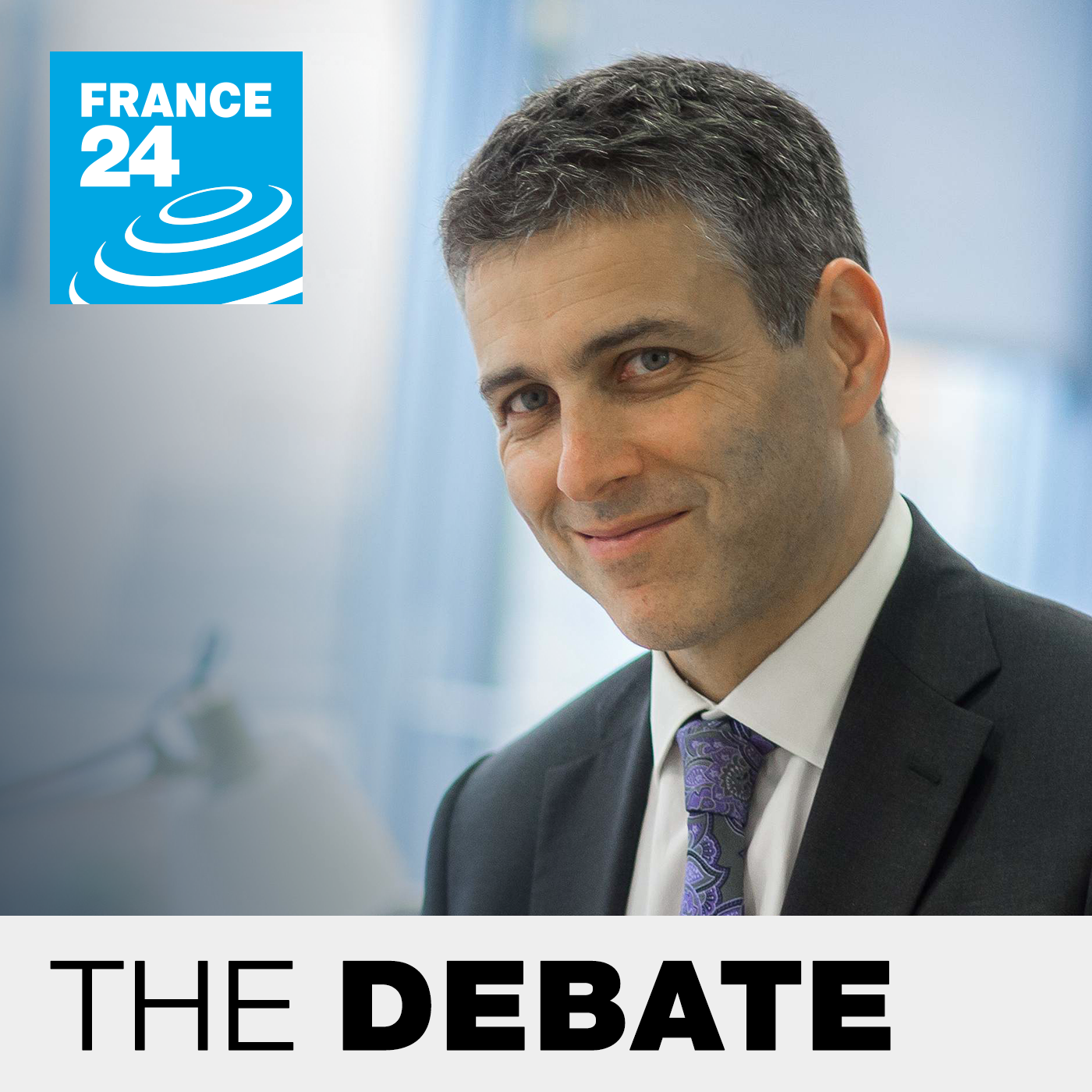 A live debate on the topic of the day, with four guests. From Monday to Thursday at 7.10 pm Paris time.

Age of intolerance? Outrage in France after beheading of school teacher

Oct 19 2020 42 mins
Is nothing sacred? Since the 19th century, France has sent out public school teachers to the four corners of the land with a mission to embody the values of the Republic. To behead a social studies teacher over Charlie Hebdo cartoons of the prophet in the carefully controlled context of a civics class on secularism and free speech defies reason.

Covid Curfew: Can France avoid the return to a full lockdown?

Oct 15 2020 40 mins
A second wave and a new approach, but will it work? President Emmanuel Macron on Wednesday announced that the Île-de-France region and eight of France’s metropolitan cities are in for a one-month, 9pm-6am curfew. At least. With Covid-19 patients already occupying 40 percent of the capital’s Intensive Care Unit (ICU) beds – does France have any other choice? And how will the curfew work?

The race for a Covid-19 vaccine: Are lives at risk as countries try to find a quick fix?

Oct 14 2020 30 mins
The race is on for a Covid-19 vaccine. It’s as urgent as a sprint, but requires the meticulous preparation of a marathon. Then there are hurdles to overcome - perhaps more like a steeplechase. The race began in January with the identification of the SARS-Cov2 genome. By March, the first vaccine safety trials on humans began. And the pandemic took a tighter and tighter hold on the world. Ten vaccines are now in the final phase of testing.

Oct 13 2020 41 mins
Tonight we look at Nagorno-Karabakh through the eyes of the powers behind the conflict which started on September 27. The death toll can only be put as an estimate: at least 600 so far. While Armenia and Azerbaijan are at loggerheads over the ownership of the enclave, there are other powers who also are taking a keen interest. Among them, Turkey.

Oct 12 2020 38 mins
We examine the current situation in France and in neighbouring countries with regards to Covid-19. This as the number of new cases across the continent continues to rise at an alarming rate, prompting governments to implement fresh containment measures.

Oct 08 2020 43 mins
How did she do? Kamala Harris appeared on the world stage on Wednesday as the only first-timer on either major party's presidential ticket in 2020. We ask how the junior senator from California fared against incumbent Republican Mike Pence in the first and only vice presidential debate. How did she do? What has changed since Hillary Clinton topped the ticket for the Democrats four years ago?

Oct 07 2020 41 mins
Who's going to stop the fighting between Armenia and Azerbaijan? Yes there have been periodic flare-ups since the mid-1990s and the brutal border war that accompanied the break-up of the Soviet Union in Nagorno-Karabakh. But why does the fighting over that mostly Armenian-speaking separatist enclave seem so much more intense this time? FRANCE 24's teams are on both sides.

Oct 06 2020 41 mins
Winter is coming, Covid's spiking, so can the food capital of the world cope? After Marseille, authorities are tightening the screws for at least two weeks in Paris. Bars and tapas joints are closed. Restaurant seating is limited in numbers with social distancing rules. Is it enough if hospitalisations continue to rise? And is it enough to keep eateries in business?

Trump and Covid-19: What next in US presidential race?

Oct 05 2020 40 mins
First the US president caught Covid-19, then he was hospitalised and then... he went for a car ride? Donald Trump says he has "learned a lot" about Covid over the past few days. We ask our panel about it and whether his illness will once and for all end the argument over social distancing.

Oct 01 2020 43 mins
As the French Red Cross spearheads a United for Lebanon fund drive, The France 24 Debate goes to Beirut two months after the chemical blast at the port that still has the capital reeling.

Race to the bottom: What does Trump-Biden debate say about US democracy?

Sep 30 2020 40 mins
Traditionally, US presidential debates barely sway public opinion, if at all. Of course, the spectacle that unfolded on Tuesday night in Cleveland was not your traditional debate. For 90 minutes, tens of millions of Americans watched Donald Trump and Joe Biden needle, badger, interrupt, and sometimes even insult. But were viewers agape and embarrassed or cheering and baying for blood? Is it infotainment that will soon be forgotten or a telling illustration of the state of democracy in the US?

On the Eastern Front: Macron's push to raise EU's clout

Sep 29 2020 40 mins
"We will do our best as Europeans to help mediate." Those were French President Emmanuel Macron's words after becoming the first Western leader to meet face-to-face with exiled Belarus opposition leader Svetlana Tikhanovskaya. Macron was taking time out of a long-planned visit to Lithuania to answer her call to broker dialogue with Alexander Lukashenko, who last week staged a secret inauguration to a sixth term.

Sep 28 2020 41 mins
Why are Armenia and Azerbaijan back to the brink of all-out war? Dozens have been killed in a flare-up of July's tensions in the separatist Armenian-speaking enclave of Nagorno-Karabakh. This time, it has escalated with both sides declaring martial law and competing images to back up rival claims. It could escalate even further, what with Turkey jumping to Azerbaijan's defence and President Recep Tayyip Erdogan pulling no punches this time. What is Ankara's next move? What response from Russia in a standoff that pits two former Soviet republics against each other?

How to live with it? Europe scrambles to avoid second Covid lockdown

Sep 24 2020 41 mins
Avoid hospitals from being overrun again. Avoid a second lockdown at all costs. France but also Spain, the UK and others are all asking one simple question: how to live with Covid-19? In two weeks, the number of French Covid patients in hospital has doubled. So why are citizens in some of the hardest hit areas like Marseille so angry at new restrictions that include the shutting of bars, restaurants and gyms?

Sep 23 2020 42 mins
What does a fair and realistic migrant policy look like in 2020? Just two weeks after the fires that gutted Europe's largest refugee camp on the Greek isle of Lesbos, the European Commission is unveiling its plan to reform the so-called Dublin protocol, which up to now obliged asylum seekers to register in their port of entry, thus making it Greece, Italy and Malta's problem.

Sep 21 2020 42 mins
Does the passing of Ruth Bader Ginsburg ensure Donald Trump's legacy? The US president says that by the end of the week, he will nominate a new Supreme Court justice. If the Republican-controlled Senate approves his pick, whether or not Trump's out of a job on November 4, he will have chosen three of the nine justices on the bench. We are talking about lifetime appointments that for decades could shape arguments over deregulation, healthcare, voting rights, protection of minorities and abortion.

The 'Cuties' controversy: Are today's schoolgirls empowered or under pressure?

Sep 17 2020 38 mins
Why has "Cuties" struck a nerve? An award-winning film set in Paris's working class suburbs, about an 11-year-old girl torn between the demands of her family and the pressure to be sexy, seemed destined for an honourable run on the art house circuit.

Not so fast? The pros and cons of 5G technology

Sep 16 2020 41 mins
What’s the problem with 5G? A little over a week before France is due to deliver licenses and as newly-elected left and Green Party mayors lead the call for a moratorium, France's President tells a French tech conference that he is a fan of next generation 5G. We listen to Emmanuel Macron's take a jab at the “Amish model”. But, putting Puritan sects and COVID conspiracies aside, are there real health or environmental risks linked to what has been billed as an acceleration to warp speed for wireless mobile networks?

Sep 15 2020 19 mins
So is it historic? At the same White House that hosted Israel's 1978 peace deal with Egypt and the 1993 Oslo accords with the Palestinians, now comes the normalisation of ties with the United Arab Emirates and Bahrein, with both foreign ministers in attendance. Relations between Israel and the Gulf monarchies warmed a long time ago. Why come clean now?

Why is the West Coast burning? Record wildfires force rethink of land management

Sep 14 2020 39 mins
Why is the Pacific coast burning? After a weekend that saw half a million Oregon residents evacuated and as Donald Trump visits California, why is the West Coast of the United States reliving the nightmare of the 2018 brush fires - or worse, since a record area's been scorched and it's only the start of the dry season.

Sep 10 2020 41 mins
The back-to-school spike in Covid-19 cases is on, with France, Spain and the UK all fearing an exponential rise in casualties. That's before the next spike when the weather here turns cold and Europe migrates indoors. Can we even bet on a vaccine to make this nightmare go away? Or is time to discuss the simple hard truth the West seems to have rediscovered with this unexpected pandemic: there's no such thing as zero risk. How to manage that risk? What sensible measures to reduce that risk and what does learning to live with the virus actually mean?

Sep 09 2020 40 mins
From the United Kingdom, home of great drama and great comedy, comes the new season of Brexit. With five weeks to strike a trade deal, the suspense is already building. But critics contend there is nothing funny about the UK government's opening gambit: a bill that of its own admission would "break international law".

Which way for Belarus? Protesters defy Lukashenko's grip on power

Sep 08 2020 42 mins
For years, Belarus had been branded as Europe's last dictatorship. Now, is it ripe for revolution? Despite a crackdown and claims by longtime strongman Alexander Lukashenko that he won re-election with 80 percent of the vote, protesters in major cities keep coming out. With a neophyte leadership that's now either in exile or in jail, can the opposition sustain the momentum?

What India after Covid? Country reopens as cases surge

Sep 07 2020 41 mins
How will Covid-19 change India? Amid the steady rise in confirmed cases comes a true test of resilience. We ask about the fight against the unforeseen pandemic both in cities and those all-important rural areas where two thirds of Indians live. It's about lives and livelihoods: what's changed since last March's sudden lockdown, which left day labourers scrambling and an already slowing economy reeling?
5 • 1 Ratings
TPDwyerEsq Jun 17 2020
In response to "Take them down?" Most of the statues coming down in America were specifically put up to promote a version of American history that was not popular at the time. E.g. Statues of southern generals started appearing simultaneously w/ Jim Crow laws, to promote the propaganda that the 'southern cause' was worthy, two generations after the civil war. Similarly, Italians were mistreated as immigrants, wanted respect, hence the Columbus day propaganda. Columbus' contemporaries reviled him