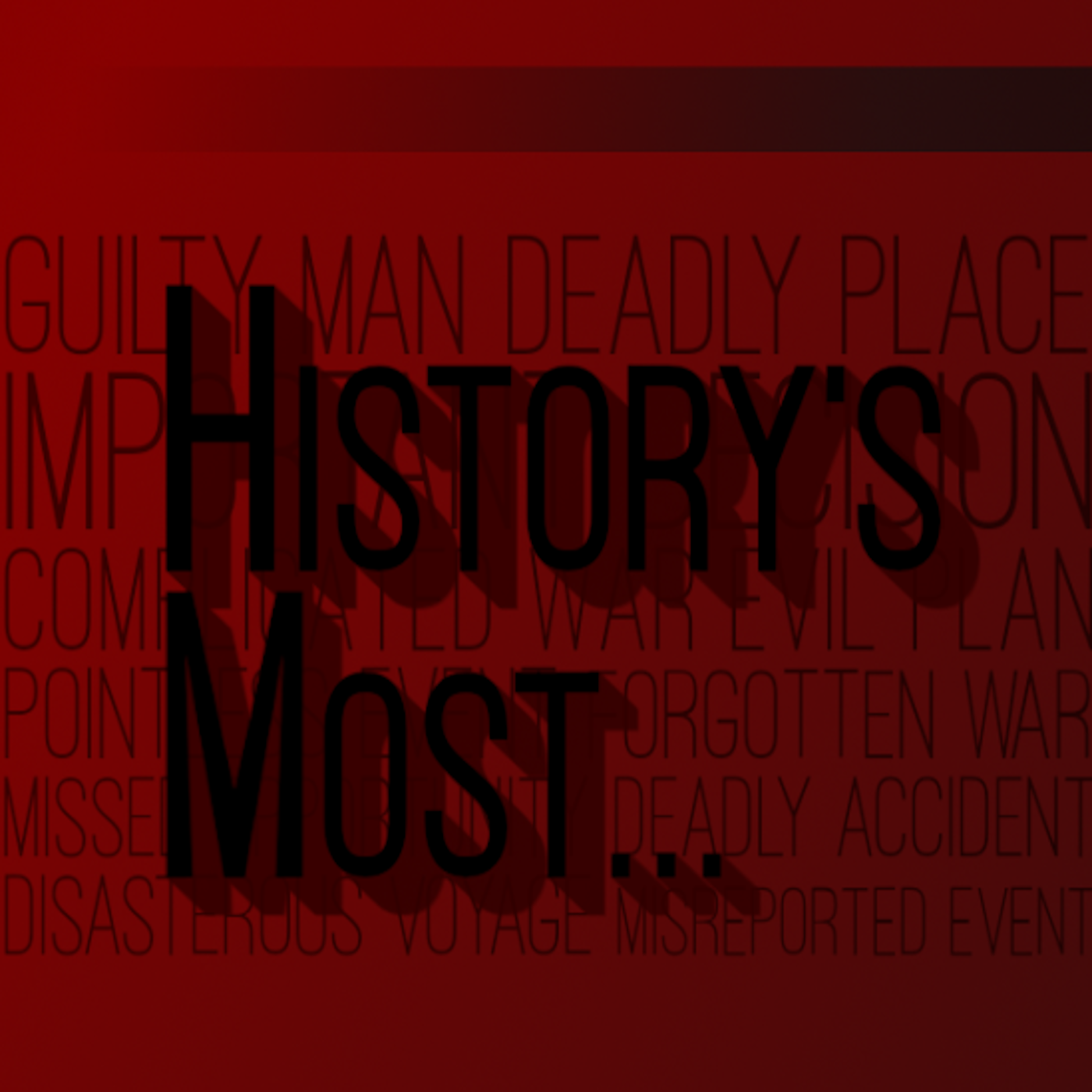 History's Most is a podcast that delves into interesting, under-reported and controversial topics in history and applies superlatives to them. We deep dive headfirst into a variety of topics, from history's most guilty man, to the most disasterous voyage, to complicated wars and confusing politicians.

Oct 20 2020 84 mins
Today, we are joined by Scott Ramsay and Stephen Rainbird, PhD students at University of Leeds, who are researching Anglo-Iberian relations, to discuss Britain's role in the Spanish Civil War. We take an in depth look at British foreign policy during the Civil War and its aftermath and ask: Was Perfidious Albion responsible for Franco's victory and survival in Spain? Thanks so much to Scott and Stephen for coming on the show.

Oct 05 2020 64 mins
In this anniversary episode of History's Most, we are joined by author, historian, and Hispanist, Sir Paul Preston to discuss the political history of Spain, particularly the corruption and political incompetence that plagued Spain during the late 19th century, and throughout the 20th century. From the Turno Pacifico, Primo de Rivera's reign, the Second Spanish Republic, to Franco and more, we take a hard look at History's Most Corrupt Political Class. A huge thanks to Paul for coming on the show.

Sep 22 2020 105 mins
In this episode, we are joined by Hispanist Séan Scullion to discuss the fascinating story of Spaniards who fought in the British Army during World War II. Following the Spanish Civil War, many Republicans fled Spain and began serving in the French military. Following the fall of France, those same Republicans ended up in the British Army. Join us as we take a look at their experiences, where they served, what units they were in, and much more. Big thanks to Séan for coming to us with this topic!

Sep 07 2020 107 mins
In today's episode, we are joined by author of the book Unlikely Warriors, and research fellow at the London School of Economics, Richard Baxell, to discuss the International Brigades in the Spanish Civil War. From how the Brigades were formed, to why and how people flocked to Spain, the battles they fought, and the people who served in them, we go in depth about how these men became History's Most Unlikely Warriors. A big thanks to Richard for joining us!

Aug 24 2020 58 mins
In today's episode, we are joined by Dr. Guy Perry to discuss the unique story of John of Brienne. From being a nobleman in France, to becoming the King of Jerusalem, leading a Crusade, to eventually becoming the Emperor of Constantinople, John of Brienne's life was full of surprises, and he can definitely lay claim to having History's Most Varied Career. A big thanks to Guy for joining us this episode. Find his book on John here: https://www.bookdepository.com/John-Brienne-Guy-Perry/9781316620298

Aug 18 2020 2 mins
We'd like to invite History's Most listeners to the virtual launch of Alex's new book, Fighting for Spain! To sign up, send an email to [email protected] to book your place for free. Thursday, 27th of August at 7:30 PM BST

Aug 10 2020 82 mins
In this episode, we are joined by Mark Seven of the Record of Arms Podcast to talk about one of the most important events in the history of both Spain and Morocco: The Rif War. We take a look at Spain in North Africa before the war, why it happened, the brutality of the conflict itself, the impact it had both on the people fighting it, on Spain's future, both long term and short term. BIG thanks to Mark Seven from the Record of Arms Podcast. Find it here: https://recordofarms.buzzsprout.com/

Jul 27 2020 91 mins
In this episode, we return to Oliver Cromwell to discuss what we weren't able to in Episode 17: Cromwell's politics, and his tenure as Lord Protector. Professor Martyn Bennett joins us to take a look at what makes Cromwell so complicated: from his beliefs of religious freedom clashing with his actions in Ireland, to his desire for a democracy in spite of his absolute power over the country, and much more. Martyn's book: https://www.bloomsbury.com/uk/cromwell-at-war-9781786722478/

Jul 15 2020 110 mins
In today's episode, Alex's brother joins us to discuss History's Worst Stalemate: the Isonzo Front of 1915-1918. We take a look at all 12 battles of the front, discussing the tactics, the equipment used, and the sheer incompetency of the leadership that brought them to 12 battles to begin with.

Jun 29 2020 97 mins
In this episode, we discuss the military career of one of the most important, controversial, and divisive figures in British history: Oliver Cromwell. From his early days as a landowner and as a member of Parliament, to raising some of the best cavalry troops ever seen and ultimately creating the New Model Army, we take an in-depth look at the man, the battles he commanded to victory, and the impact he has on the modern world.

Jun 16 2020 66 mins
In this episode, we take a look at inquisition-era Iberia, and the experiences of the Sephardic Jews during the Portuguese Inquisition. Joining us is Brad Pomerance, host of Air, Land & Sea on Jewish Life TV. He guides us through the fascinating history of Jews in Portugal, from the golden age of Jewish culture in Iberia, through the inquisition, and up to the modern day. A HUGE thanks to Brad from JLTV. Check out his show at http://www.jltv.tv/shows.php?id=65 And find him on Twitter @bradpomerance

15. History's Most Underrated Civilization (ft. Robin from The History of Byzantium)

Jun 01 2020 84 mins
In today's episode, we take an in depth look at one of the most important civilizations in all of history: Byzantium. And guiding us through this storied and complex civilization is Robin Pierson, host of The History of Byzantium podcast. From its vast, thousand-year history, to parallels with the modern world, we discuss what makes Byzantium History's Most Underrated Civilization. A HUGE thank you to Robin from The History of Byzantium Podcast. Check him out at https://thehistoryofbyzantium.com/

May 19 2020 97 mins
In today's episode, we dive down the rabbit hole of the causes of the French Revolution. Guiding us is Gary Girod, host of The French History Podcast, helping us to understand the intricacies of what exactly caused the revolution. From France's financial situation at the time, to a new breed of thinkers and philosophers, we look at the roots of this incredibly important event. A HUGE thank you to Gary from The French History Podcast. Please check out his show at: https://www.thefrenchhistorypodcast.com/

May 05 2020 89 mins
In this episode of History's Most, we return to the Crusades, specifically taking a look at the Fourth Crusade; one of the most shocking and bizarre stories we've discussed on the show so far. A story of bad decisions, a lack of funding, and self-interested and deceptive leaders, which culminates in History's Worst Friendly Fire Incident: an attack on one of the most important cities (and a fellow Christian power) in the world; Constantinople, the center of the Eastern Orthodox Church.

Apr 20 2020 79 mins
Was Hitler a socialist? Were the Nazis, who were allied with people like Franco and Mussolini actually leftists? Do modern liberalism and fascism "share the same intellectual roots"? The answer to these questions is a resounding no. In this episode of History's Most, we discuss where these questions have come from, why they're being asked more often, and precisely why they're incorrect.

Apr 06 2020 79 mins
In this very special episode, we are going further back than History's Most has ever gone before: back to 9 CE to discuss one of the most important people in German and Roman history, Arminius. Taking us through his life is Jacob Collier, from Podcast on Germany. From early days in Rome, to his decisive victory at Teutoburg Forest, we go through what truly makes Arminius History's Most Successful Freedom Fighter. A VERY big thank you to Jacob for joining us. Find him at: https://www.podcastongermany.com/

Mar 23 2020 86 mins
In this episode, we offer a final addendum to our series on 20th century Spain. After 40 years of fascism under the rule of Francisco Franco, Spain looks to a young new leader, Adolfo Suárez, to take up the mantle and to lead Spain forward. Propped up by years of being a well-liked figure within the Francoist ranks, Suárez would seem to be the man for the job to carry the party into the future. But as the title of this episode suggests, his vision for Spain might not be what the old guard were expecting..

Mar 09 2020 72 mins
In this episode, we conclude our series on 20th century Spain by discussing the most important event in modern Spanish history: The Spanish Civil War. We discuss the politics of both Franco's nationalists and the Republicans, the foreign support for both sides, the role of the International Brigades, and more about what makes this truly History's Most Complicated War.

Feb 24 2020 87 mins
In this episode, as part of our series on 20th Century Spain, we discuss the Second Spanish Republic. Finally free from the shackles of the turno parties, the monarchy, and Primo de Rivera's dictatorship, the formation of a true republic could signal a new era for Spain... But with clashing ambitions from the left and right, and the great depression impacting the world economy, it certainly won't be easy for the new government to find its footing. And on the horizon, something else looms for Spain...

Jan 10 2020 65 mins
This episode is the first in a trilogy on 20th century Spain and tells the story of the corrupt Turno system which survived to 1923. Bribery and coercion determined the results of elections as two parties alternated in office to give the illusion of democracy. Amidst staggering levels of incompetence and egotism, the system began to break down as the Turno parties fell apart and the effects of the Great War began to be felt even in neutral Spain. When the system collapsed, its passing was mourned by no one.

Dec 14 2019 66 mins
This episode of History's Most is our Christmas special! Join us as we discuss three small "stocking filler" stories from history, followed by a few recommendations for historical books, movies, and shows, that we've enjoyed, and that we think our listeners will enjoy as well! Happy holidays and a very merry Christmas from History's Most! Pre-order Alex's upcoming book here: https://www.pen-and-sword.co.uk/The-Peoples-Army-in-the-Spanish-Civil-War-Hardback/p/17104

Dec 01 2019 74 mins
Today we go back nearly 1000 years to the First Crusade for History's Most Unlikely Victory. How did an army of knights, nobles and peasants take much of Asia Minor and the Holy Land, without clear leadership, in the face of supply and desertion issues and despite a multitude of setbacks? This episode is a story of a victory against all odds. Music: Sergei Rachmaninoff - String Quartet No. 2 as recorded by Steve's Bedroom Band and Steve Jones licensed under Creative Commons 4.0.

Nov 17 2019 63 mins
History's Most Disastrous Voyage comes to a terrible end at the Battle of Tsushima, May 1905. Somehow, Rozhestvensky's fleet makes it to the Pacific, only for more mistakes and mishaps to lead to a deadly clash with the Japanese Imperial Navy. If you thought last episode was bad, things are about to get a whole lot worse... Music: Sergei Rachmaninoff - String Quartet No. 2 as recorded by Steve's Bedroom Band and Steve Jones licensed under Creative Commons 4.0.

Nov 03 2019 67 mins
This episode of History's Most brings us to 1904, where we follow the Russian Navy's 18,000 mile long journey from the port of Saint Petersburg in the Baltic Sea to the Tsushima Strait off the coast of Japan. We dive in-depth to each mishap and incident along the way, discussing what truly made this journey History's Most Disastrous Voyage. Music: Sergei Rachmaninoff - String Quartet No. 2 as recorded by Steve's Bedroom Band and Steve Jones licensed under Creative Commons 4.0.

Oct 07 2019 124 mins
Our first episode investigates Erich Ludendorff, Germany's World War One general. We examine his fascinating life, and explore the fateful decisions he made which had dire consequences for European history. We discuss his accountability for unleashing the Bolshevik Revolution, unnecessarily prolonging WWI, undermining German democracy and aiding the fledgling Nazi movement. Ludendorff's story takes us on a 20th Century odyssey of war, plots, conspiracy theories, political extremism and mental health.
No review available yet...