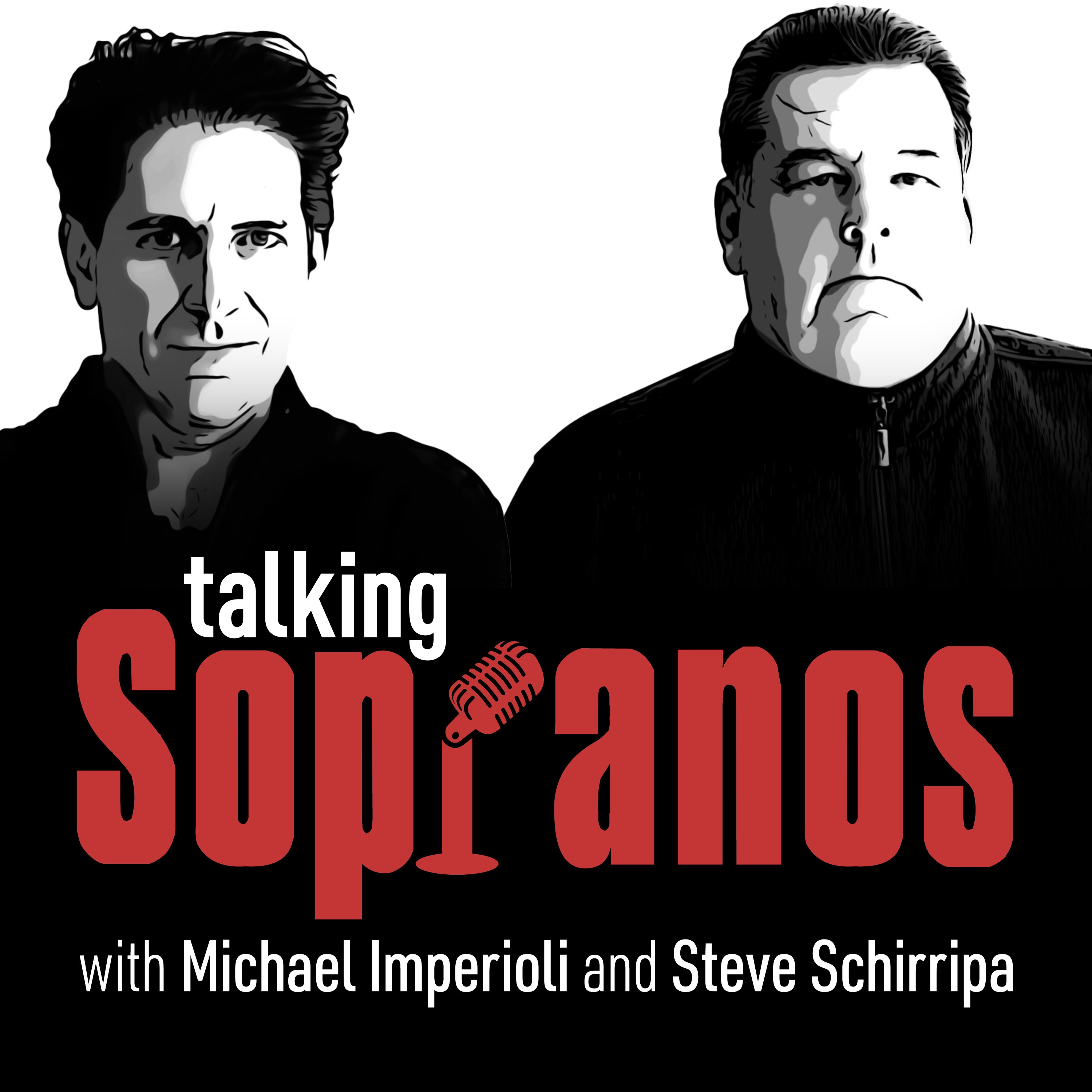 Sopranos co-stars Michael Imperioli and Steve Schirripa host the definitive Sopranos re-watch podcast. Michael and Steve follow the Sopranos series episode by episode giving fans all the inside info, behind the scenes stories and little-known facts that could only come from someone on the inside. Talking Sopranos also features interviews with additional cast members, producers, writers, production crew and special guests. Along with talking about the Sopranos, Michael and Steve will also share candid conversations about the entertainment business, their friendship and all the folks they’ve met along the way. This is a must listen for all Sopranos fans.

Jul 13 2020 79 mins
Evil has arrived and its name is Richie Aprile! In this episode Michael and Steve get into the dramatic appearance of this season’s villain and Meadow’s insane house party. They discuss how Tony is now getting it from all sides. Janice is conniving her way through the family, Meadow is playing the Mob boss like a fiddle and Melfi is now using Tony as her therapy. Watch out Beansie the car is in high gear it's headed for you. Plus Michael and Steve talk about what it’s like to audition for a gig and some of their funniest hits and misses. It’s all on this week’s episode of Talking Sopranos #16 S2 Ep3 Toodle-F**king-Oo. Make sure to subscribe to the Talking Sopranos podcast wherever you get your podcasts and check out some of Michael’s music at TalkingSopranos.com.

Episode #15 "Do Not Resuscitate"

Jun 29 2020 92 mins
Michael and Steve take on the Season 2 Premiere ….and this episode does not disappoint. The Sopranos series is getting bigger, there are more characters, more plot twists and more downright evil for Tony Soprano to deal with. His best friend might be a rat, indictments are coming down, his uncle and mother tried to have him killed, his crazy insane sister is coming, his goomah, his wife wants him back in therapy….It’s insanity! All this plus Michael and Steve share stories about how it all started, their first jobs and how they originally got into show business. Make sure to check out Talking Sopranos episode #14 “Guy Walks Into a Psychiatrist’s Office”. Remember to subscribe to the Talking Sopranos podcast wherever you get you podcasts and keep those questions coming at talkingsopranos.com.

Episode #13 "I Dream of Jeannie Cusamano"

Jun 15 2020 89 mins
This one is a shocker in more ways than one. Michael and Steve discover an outlandish theory about Tony Soprano. They also talk about the ridiculous Paulie Walnuts anthrax scare, Steve’s views on assassination and what movies influenced their lives. Michael and Steve also remember James Gandolfini and talk about when they first heard the devastating news about his death. This episode is packed with tons of inside info about the script and the production of one of the Sopranos wildest episodes. Was it a dream, was it the lithium or have we all been fooled for 20 years! The secret lies with “Isabella” Season 1 Episode 12 of Talking Sopranos. Keep those questions coming for Michael and Steve at talkingsopranos.com and remember to subscribe to the Talking Sopranos podcast wherever you get your podcasts.

Episode #11 "Nobody Knows Anything"

Jun 08 2020 96 mins
Steve and Michael reveal a story about how Tony Sirico was horrified when he saw the script for this episode. He complained to David Chase who changed a line about Paulie Walnuts. Then Michael and Steve are joined by director Henry Bronchtein. He explains how he shot the amazing scene with Detective Makazian plunging to his death and the dramatic moments between Tony and “Big Pussy”. Who was telling the truth, who was the rat? Even Henry and Vinny Pastore didn’t know for sure. This is a wild one and the title tells it all….This week Talking Sopranos takes on “Nobody Knows Anything” Season 1 Episode 11 of greatest TV series ever! Thanks for all your support and keep those questions coming at talkingsopranos.com.

Jun 01 2020 118 mins
Casting directors Georgianne Walken and Sheila Jaffe join Michael and Steve to talk about how they cast James Gandolfini, Steven Van Zandt and the rest of the Sopranos characters. They also share stories about Tony Sirico, Aida Turturro and how Jerry Stiller almost became Hesh. Then Michael and Steve breakdown this week’s episode which was a break out for Drea de Matteo. It’s all this and more on Talking Sopranos Episode #10 “A Hit is a Hit”. Go to Talking Sopranos.com to post AMA questions for Michael and Steve and don’t forget to subscribe to the Talking Sopranos podcast wherever you get your podcasts.

May 25 2020 92 mins
This week Michael and Steve take on the Sopranos S1 Ep 9. Michael tells how David Chase brought in a retired mobster to help the writers develop the concept for this episode. He also shares a crazy story of a night that got completely out of control when he and John Ventimiglia (Artie Bucco) sublet an apartment from a real duke in NYC. Steve gives new meaning to the term “Beatle Wig” and explains why real mobsters won’t do what Junior Soprano is so good at. Then Michael and Steve head into the mouth of the rat and breakdown all the secrets buried in this episode. Don’t miss Talking Sopranos episode #9 “Boca”, and remember to keep the questions for Michael and Steve coming at talkingsopranos.com.

Episode 8 "The Legend of Tennessee Moltisanti"

May 18 2020 105 mins
Jamie Lynn-Sigler tells Michael & Steve how she got the role of Meadow Soprano, what it was like to work with James Gandolfini and her amazing time on the groundbreaking HBO series. She talks about how she originally thought the Sopranos was a musical and asked David Chase if he needed her to sing at the audition? Then Michael and Steve breakdown the Sopranos S1 Ep 8 “The Legend of Tennessee Moltisanti”. Michael talks about how this episode was a turning point for his character and his first thoughts on the script. All this and much more in this episode of Talking Sopranos. Make sure to subscribe wherever you get your podcasts and send questions to Michael and Steve at talkingsopranos.com

May 11 2020 106 mins
Guest Robert Iler (AJ Soprano) joins Michael and Steve to talk about working with James Gandofini, his incredible time on the Sopranos, and being a professional poker player. Did he really shave his eyebrows in season 5? Then Michael and Steve break down the Sopranos S1 Ep 7. They discuss the flashback to 1967 and some of the David Chase’s interesting music choices. Tony tells Melfi he was always proud to be Johnny Soprano’s son but was it Livia who was the real gangster? It’s all in this this week’s episode of Talking Sopranos #7 “Down Neck”. Go to talkingsopranos.com to ask questions and more.

May 04 2020 83 mins
A Talking Sopranos exclusive! Michael Imperioli and Steve Schirripa read all new lines written by HBO series creator David Chase for the Soprano’s characters as if they were in quarantine. Then Michael and Steve breakdown this week’s episode discussing Junior’s move to the big chair, Tony’s love for Melfi and whether Livia is now pulling the strings. They also discuss what some of the Sopranos actors were really like off screen. Is Edie Falco as good a cook as Carmela and was Jim Gandolfini really more Birkenstock then gangster? It’s all in this episode of Talking Sopranos #6 “Pax Soprana”. Go to talkingsopranos.com to ask questions and more.

Apr 27 2020 71 mins
Sopranos S1 Ep 5 – Michael and Steve breakdown one of the most incredible Soprano’s episodes ever. This was the one HBO was worried about and David Chase had to fight for what he felt had to be done. Plus what the heck is the deal with Father Phil. Talking Sopranos #5 “College”. Remember to subscribe and send your Ask Me Anything” questions to Michael and Steve at talkingsopranos.com.

Apr 13 2020 62 mins
It’s tough to be a mobster. You have to worry about getting whacked, getting pinched, your wife, your family, your goomah…Who would want the job! In this episode Steve and Michael talk about the gangster lifestyle and all the complicated problems that come with being a wiseguy. Steve reveals some fascinating real life stories about the mob as Michael begins to unfold the shades and tones of Christopher’s character. Then they unpack the episode weaving in stories of drunken parties with the Soprano’s cast and Paulie’s quirky obsessions. The deviations are the destinations as scene by scene Steve and Michael take us through “Denial, Anger, Acceptance” and the inside story of the Sopranos. Make sure submit your Ask Me Anything questions at Talking Sopranos.com.

Apr 08 2020 64 mins
Michael and Steve open the books and discuss the intricacies of how this incredible show was made. What it was like on set, read throughs, tone meetings and David Chase’s incredible attention to detail. Michael talks about the moment he realized the show was going to be a hit and what it was like working with the amazing cast. Then, Michael and Steve break down the episode scene by scene giving us some backstory on the main characters and their thoughts about the script. There’s another Ask Me Anything segment and lots of history about the cast. Don’t forget to submit your questions to talkingsopranos.com. Enjoy!

Apr 06 2020 78 mins
Welcome to the premiere episode of Talking Sopranos! Michael and Steve go back to the beginning and talk about how they got involved in this ground-breaking series. They discuss their initial thoughts about the show and their first auditions with David Chase. They’ll share some of their favorite stories about the cast and give us an inside look at what was going on behind the scenes. Then Michael and Steve break down the Pilot episode of this iconic series scene by scene. They discuss the little details, their favorite moments and give us a unique POV on what it all means. Plus our first Ask Me Anything Segment and more than a few surprising moments. Don’t forget to submit your questions at TalkingSopranos.com. Enjoy Sopranos Fans, this is only the beginning!

Feb 25 2020 2 mins
Michael Imperioli and Steve Schirripa team up to bring you the definitive Sopranos re-watch podcast. Check out a sneak peek of Talking Sopranos premiering this April.
4.4 • 7 Ratings
Bobbi_md73 Jul 05 2020
I just found your podcast after listening to you guys give an interview. I am in love. As a long time fan of The Sopranos, you have opened my mind to consider so many meanings and interpretations, I never even considered in all my viewing. This is a Covid gift. Thanks fellas, for this podcast. Blessings to you both. (ME, 🇩🇴)
Madasfire Jun 18 2020
I really enjoyed this podcast. Sound quality needs improvement, but the "inside baseball" commentary is amazing. Love to hear behind the scenes stories.
lmaskier Jun 17 2020
Haven't listened yet but I'm already in!!!
ronansprake Jun 01 2020
Big improvement over the last couple of weeks, the guests have been great.
rexifries May 12 2020
If you loved the Sopranos or are new to the show, you'll love this podcast! Interesting, funny behind the scenes stories! Thanks guys!
NVaughan May 05 2020
It's great. Love it.
Martin Zeibig May 04 2020
I like it, but the sound is really bad. They are rocking on their chairs, drumming on the table and so on. And the mics pick it all up.