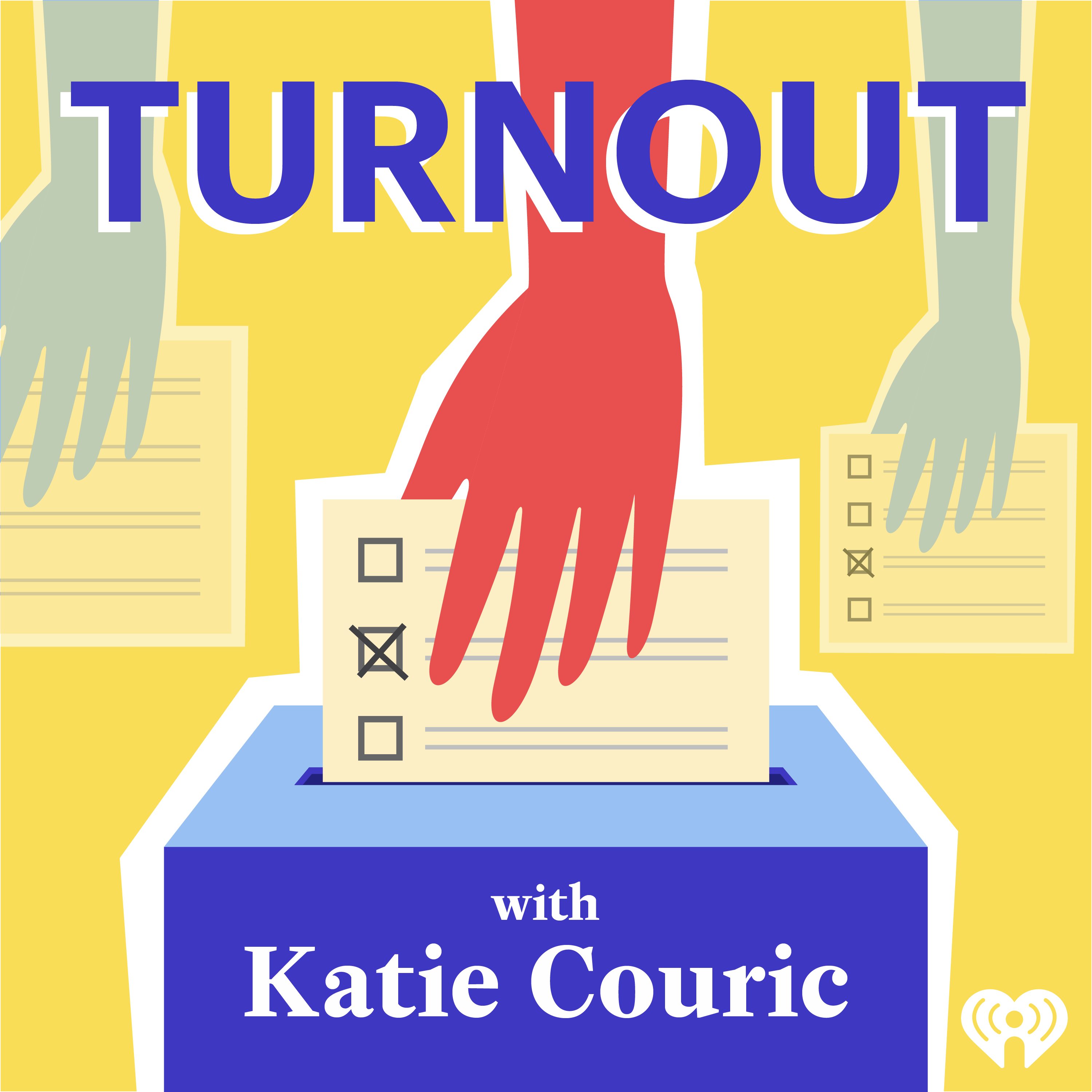 Voting may be the cornerstone of our democracy, but the reality of how voting works in America — and who gets to do it — is not as fair or clear-cut as we like to tell ourselves. In this new limited series, award-winning journalist Katie Couric explores America’s voting record — past, present, and future — with the help of activists, historians, politicians and luminaries. Through personal stories and engaging interviews, we’ll talk about the ways voters have been kept out of the system and spotlight those fighting — on the ground and in the courts — to ensure everyone can participate in our democracy.

Episode 4: ‘Young people are the moral compass of the country’

Oct 22 2020 36 mins
This week on Turnout with Katie Couric: the power and drive of youth activism. First, 19-year-old youth activist Tyler Okeke makes the case for lowering the voting age to 16. Then, Katie talks with activist, author and podcast host DeRay Mckesson on his own youth activism and how to get this new protest generation to turnout for elections (hint: make voting easier!). We also hear advice from civil rights activists on where they find inspiration and why it’s important to keep paving the way, to make the world better and easier, for those who come after you. More about the guests and organizations mentioned in this episode: Courtland Cox, activist and veteran of the Student Nonviolent Coordinating Committee Tyler Okeke, Vote at 16 Youth Organizer for Power California DeRay McKesson, activist, author of the book, “On the Other Side of Freedom: The Case for Hope,” and host of the podcast “Pod Save the People” from Crooked Media Rock The Vote, youth empowerment organization Judy Richardson, documentary filmmaker and veteran of the Student Nonviolent Coordinating Committee

Episode 3: ‘A guerrilla act of subversion’

Oct 15 2020 33 mins
This week on Turnout, Katie Couric explores how disinformation is used to suppress the vote and how it’s being tackled by activists and citizens alike. While disinformation has been used to subvert the voting process for decades, long before the internet, it is now thriving online like never before. “Bad actors” are lurking behind your screen and on your social media platforms, eager to sew chaos and distrust in the election system. But, fear not! There’s hope and also something YOU can do. Jesse Littlewood from Common Cause shares tips for how to spot disinformation on the internet and what to do about it (hint: don’t engage!). And, in an effort to provide some sort of check to Facebook’s unbalanced power, British investigative journalist Carole Cadwalladr tells us how her group, the “Real Facebook Oversight Board,” plans to hold Mark Zuckerberg’s feet to the fire. More about the guests and organizations featured in this episode: Jesse Littlewood is the vice president for campaigns at Common Cause. As part of its election protection work, Common Cause has launched a Stop Cyber Suppression program, where you can report disinformation or join the Common Cause Action Team’s Social Media Monitoring program. Carole Cadwalladr is a British Pulitzer-nominated investigative journalist who broke the Cambridge Analytica story after working with whistleblower Christopher Wylie for a year. The Real Facebook Oversight Board

Episode 2: ‘I’m coming back to Selma to start a movement’

Oct 08 2020 53 mins
Sheyann Webb-Christburg was eight years old when she first met Martin Luther King, Jr. It was late 1964 and Dr. King was in Selma, Alabama, to organize a voter registration campaign to draw attention to the need for legislation that would ensure Black Americans could safely and freely vote, because in the 1960s, particularly in Southern states like Alabama, that was certainly not the case. “Black folks couldn’t vote,” Sheyann’s father said when asked if he had ever cast a ballot. On this episode of Turnout with Katie Couric, Katie explores the historic struggle of Black enfranchisement — from the moments of brief political prosperity during Reconstruction, to the passage of the Voting Rights Act in 1965, the election of President Barack Obama, and the ongoing fight to restore voting rights to people with past convictions. Woven throughout the episode is Sheyann’s story of being Martin Luther King’s smallest Freedom Fighter and what she witnessed on that Bloody Sunday in Selma in 1965. Katie also interviews Desmond Meade, President and Executive Director of the Florida Rights Restoration Coalition, about his inspiring life story as a formerly homeless returned citizen who in 2018 helped restore voting rights to 1.4 million Floridians. More about the guests and organizations featured in this episode: Sheyann Webb-Christburg, civil rights activist, youth advocate and co-author of the book and movie “Selma, Lord, Selma.” Gilda Daniels, law professor at the University of Baltimore law school, litigation director at the Advancement Project, and author of “Uncounted: The Crisis of Voter Suppression in America.” Dr. Carol Anderson, the Charles Howard Candler Professor of African American Studies at Emory University, author of several books including, “One Person, No Vote: How Voter Suppression is Destroying Our Democracy.” Desmond Meade, president and executive director of the Florida Rights Restoration Coalition and author of “Let My People Vote: My Battle to Restore the Civil Rights of Returned Citizens.” Annette Scott, a volunteer with The League of Women Voters, working primarily with the New Jersey Reentry Corporation leading voter registration education. *Content warning: This episode contains descriptions of violence that some listeners might find disturbing.*

Episode 1: ‘Democracy is a group sport’

Oct 01 2020 32 mins
The right to vote can sometimes be described as a “struggle,” a “fight,” even a “war.” But how did this come to be and who has been fighting to make every generation’s path to the ballot a little less arduous? On this episode of Turnout, Katie Couric goes back to the beginning, to find out what our founding can tell us about the continuing war on voting rights. Katie speaks with historian and biographer Jon Meacham about the framers’ hopes and dreams and who was left out of the more perfect union they designed. Then, Wendy Weiser, of the Brennan Center for Justice, and voting and Civil Rights expert Gilda Daniels help define voter suppression — and the many names it goes by. Finally, Oregon Gov. Kate Brown shares the ways she is helping to modernize her state’s election system — and the ways the rest of the country can and should follow suit. Guests: Jon Meacham, author “His Truth is Marching On: John Lewis and the Power of Hope” Wendy R. Weiser, director of the Democracy Program at the Brennan Center for Justice at the NYU School of Law Gilda Daniels, law professor at the University of Baltimore law school, litigation director at the Advancement Project, and author of “Uncounted: The Crisis of Voter Suppression in America.” Charles Stewart III, MIT professor of political science and founder and director of the MIT Election Lab Oregon Gov. Kate Brown

Sep 21 2020 1 mins
In this new limited series, Award-winning journalist Katie Couric explores America's voting wars, from the founding of this "more perfect union" to today. What unfolds is a struggle for power — both the fight to keep it and the fight to reclaim it through the ballot. Turnout: It's about so much more than this election.
No review available yet...