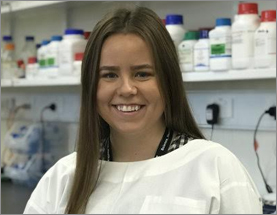 Can the immune response to viral infection be strengthened to the point that the impact of the infection is greatly reduced, and later or latent infection is prevented? This is the question at the crux of Ebony Monson’s research in the Department of Physiology, Anatomy & Microbiology at Latrobe University in Australia.

Tune in to learn:

Monson's work focuses primarily on viruses that infect humans—flaviviruses specifically, such as Zika, dengue, and hepatitis C. She studies the innate immune response that’s produced immediately after an infection, with the goal of better understanding how this innate immune response can be enhanced or augmented.

Prior to this research, no one thought much of lipid droplets, as they were largely assumed to be unimportant in the development or progression of the immune response. Monson explains how these lipids can be broken down and can actually become toxic to the host, how they move around in the cell, how they grow and become depleted, and a number of other topics which are the subject of ongoing research.

Tune in for all the details.