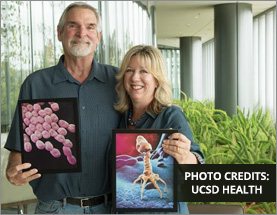 "This is the worse superbug you can get," said her husband's doctors when diagnosing him with a life-threatening multidrug resistant bacterial infection. But Steffanie Strathdee put her research skills to work and eventually was able to convince doctors to treat him with an experimental phage therapy that ended up saving his life.

Steffanie A. Strathdee is the Associate Dean of Global Health Sciences and the Harold Simon Professor in the Department of Medicine at the University of California San Diego School of Medicine. She helped found and co-directs UCSD’s new center for Innovative Phage Applications and Therapeutics (IPATH) and also works with the Global Health Institute and the International Core of UCSD’s Center for AIDS Research.

An infectious disease epidemiologist, she's also the author of

The Perfect Predator, which tells the story of her husband's struggle with a superbug and the successful effort to help him recover with phage viruses. Phages are viruses that infect bacteria, and are emerging as a potential winner as scientists struggle with how to prevent superbugs from causing deadly infections.

She gives listeners a fascinating history of how politics and war kept phage therapy out of American medicine for decades. First discovered by a French Canadian microbiologist, their adoption by Russians pre-World War II marked them as off-the-table for the American medical field. But they are emerging again as having great potential, and Steffanie Strathdee helps enlighten listeners by describing the process and why they can be effective.

First, scientists are able to pick and choose their phages, testing to make sure what bacteria the phages will infect. They can get specific, killing only the bacteria they want to target. Ideally, they'll collect a couple of different phages for the best chances of success, then make isolates of them. The most difficult stage is the purification, she says. Scientists are moving ahead, designing clinical studies.

Listen in for more exciting news about this life-saving treatment.