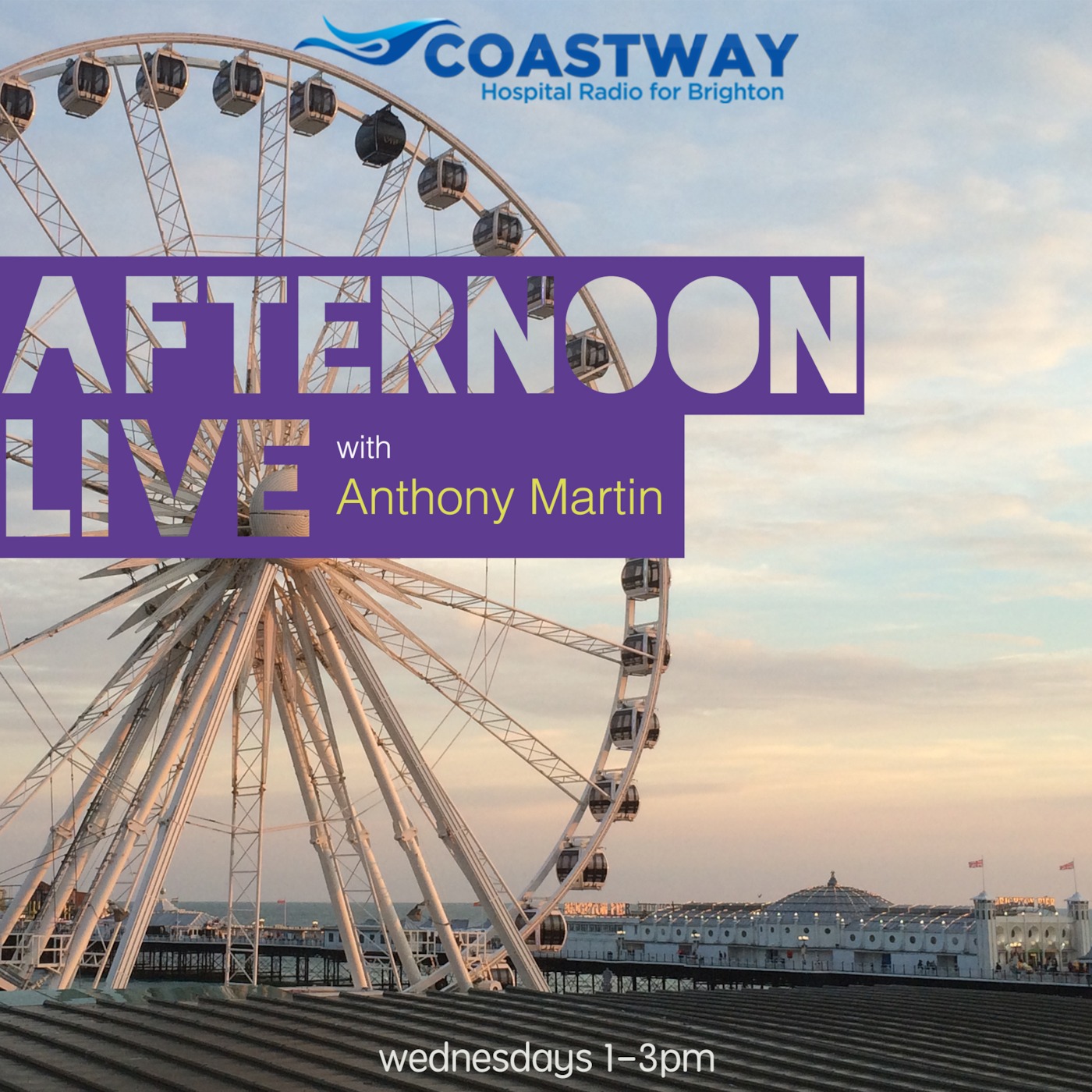 Feb 07 2016 19 mins
Holly Fitzgerald of award winning bookshop The Kemptown Bookshop in Brighton is in studio to talk about the newest and best books available in Brighton this month. This month we're looking at 5 books, talk about them and try and give some idea of what they're about. This month's featured books are: - The Public Library by Ali Smith - Beatlebone by Kevin Barry - The Dead Ladies Project by Jessa Crispin - If The Oceans were Ink by Carla Power - Panther by David Owen

Sep 30 2015 17 mins
I talk to Holly Fitzgerald of award winning bookshop The Kemptown Bookshop in Brighton about the newest and best books available in Brighton this month. This month we're looking at 4 books, talk about them and try and give some idea of what they're about. This month's featured books are: - The Story of the Lost Child by Elena Ferrante - The Colourless Tsukuru Tazaki and his Years of Pilgrimage by Haruki Murakami - Furiously Happy by Jenny Lawson and - How to Fight a Dragon’s Fury by Cressida Cowell

Aug 27 2015 20 mins
I talk to Holly Fitzgerald of award winning bookshop The Kemptown Bookshop in Brighton about the newest and best books available in Brighton this month. This month we're looking at 5 books, talk about them and try and give some idea of what they're about. This month's featured books are: - A Spool of Blue Thread by Ann Tyler - The Wake by Paul Kingsnorth - The Year of the Runaways by Sanjeev Sahota - Only Every Yours by Louise O'Neill - El Deafo by Cece Bell

Jul 29 2015 14 mins
I talk to Holly Fitzgerald of award winning bookshop The Kemptown Bookshop about the newest and best books available in Brighton this month. We look at 6 books, talk about them and try and give some idea of what they're about. This month's featured books are: - Go Set A Watchman by Harper Lee - Walking Away by Simon Armitage - Our Souls at Night by Kent Haruf - The Humans by Matt Haig - The Red Queen by Victoria Aveyard - Echo Boy by Matt Haig

Jul 22 2015 9 mins
As Brighton enjoys it's summer, I speak to Dr Kerryn Greive, Scientific Affairs Manager of SunSense UK about the dangers and risks of UV exposure and tanning. We talk about the changes that sunbed and sun tanning and sunburn make to the skin and the links to skin cancer. We also talk about how to best protect oneself against the dangers of the sun.

Jun 25 2015 12 mins
Ahead of their grand launch event, I spoke to the co-founder of Heart Venture - a friendship and dating agency for people with learning disabilities in Brighton and Hove. Inspired by her son Daniel who featured on the Channel 4 show The Undateables, the agency was set up due to the lack of any other such dating agencies in the area. We speak about how it works and future planned events as the team work on bringing a first of a kind new service to Brighton and Hove.

Jun 17 2015 8 mins
On this week's New at 2 I chatted with Chichester based singer-songwriter Ben Harvey. Ben has already released 2 EPS - the second of which went straight into the top 50 in the iTunes singer songwriter charts when it was released in 2014. His single Think About You [released 18th June 2015] was named Single of The Week by Fortitude Magazine in the lead up to its release. We talk about his music, his brand new single and his Wallace and Gromit inspired music video!

May 06 2015 13 mins
Ahead of their shows at this year's Brighton Fringe, I speak to Conor from acclaimed Irish comedy sketch group Foil Arms and Hog. We chat about their current UK tour, their work on radio and TV, their 6 sold out runs at the Edinburgh Fringe Festival and about just how cosy three lads on tour can get with one another!

Apr 22 2015 19 mins
I catch up with the eclectic musician Duke Special ahead of his Brighton leg of his UK and Ireland tour to celebrate the release of his new studio album. That album Look Out Machines was described by Q magazine as “Sumptuous, symphonic pop anthem, courtesy of dreadlocked Irishman who sounds like The Flaming Lips crossed with Rufus Wainwright”. We speak about his musical inspirations, his new album, his eclectic work [which is as diverse as writing the theme tune for the Irish Sesame Street to writing the music for and appearing in Deborah Warner’s critically acclaimed 2009 production of Bertolt Brecht’s ‘Mother Courage and Her Children’ at London’s National Theatre] and his candid take on new music.

Apr 01 2015 19 mins
On this week's New at 2 I chatted with Bristol based project Communion. They've been working together and making music since 2014 and have already gained friends in high places in the guise of music producer Robert L Smith who is an Oscar winning, Grammy nominated producer who’s worked with the likes of Michael Jackson, Whitney Houston and David Bowie! We talk about how that came about, their music so far and their future plans.

Interview with The Coronas

Mar 25 2015 10 mins
They've supported Justin Timberlake, Paul McCartney and Pink and they've toured with The Script. The have 3 double platinum selling albums in Ireland and are a household name there. They moved to the UK in 2014 where they were signed up by Island Records - home to Florence and the Machine, U2 and Mumford and Sons amongst others. Currently on a UK tour and with an upcoming show in Brighton, I spoke to Danny from the band about their success so far, their move to London, the occasional crowd surf and an eventful weekend!

Interview with The New Thieves

Mar 25 2015 8 mins
On this week's New at 2 I chatted with Brighton based three piece band The New Thieves. Formed in 2014 they've been described as Brit Pop meets Garage Rock, been compared to the likes of Catfish and the Bottlemen and their music has already been featured by footwear company Dr Martens for a campaign.

Mar 18 2015 12 mins
I chat to Connor from the Irish band Silences who are playing at Europe's leading festival for new music - The Great Escape here in Brighton this coming May. We chat about how the band came about, their most memorable performances and Conor's almost alternate career!

Interview with Time for T

Mar 11 2015 13 mins
I chat to Tiago from Brighton based 6 piece band Time for T about their story so far, their experiences performing live and how their catchy name came about!

Mar 11 2015 12 mins
We speak to Research Engineer Stephen Martin from the Nimbus Research Centre at Cork Institute of Technology about the 9th March Apple Event announcement of their new free software development kit which promises to help medical research into curing all sorts of diseases such as Parkinsons. We talk about what this means for research in general, how it opens up a whole new approach for researchers to collect data and we ask - why is Apple being so nice!

Getting in shape with 1920s dance moves.

Mar 07 2015 5 mins
I talk to Amanda of Brighton Lindyhoppers about the Charleston Athletic fitness classes they offer in Brighton.

Mar 05 2015 17 mins
On New at 2 we chatted with London based singer,songwriter, producer and rising star Fifi Rong about her music and her work.

Feb 25 2015 8 mins
A chat with the guys from Grand Parade and them introducing their song Let It Go from their Home Sessions Vol.1 EP

Feb 25 2015 18 mins
We chat about the 87th Academy Awards. The ceremony, the winners and the nominations.
No review available yet...