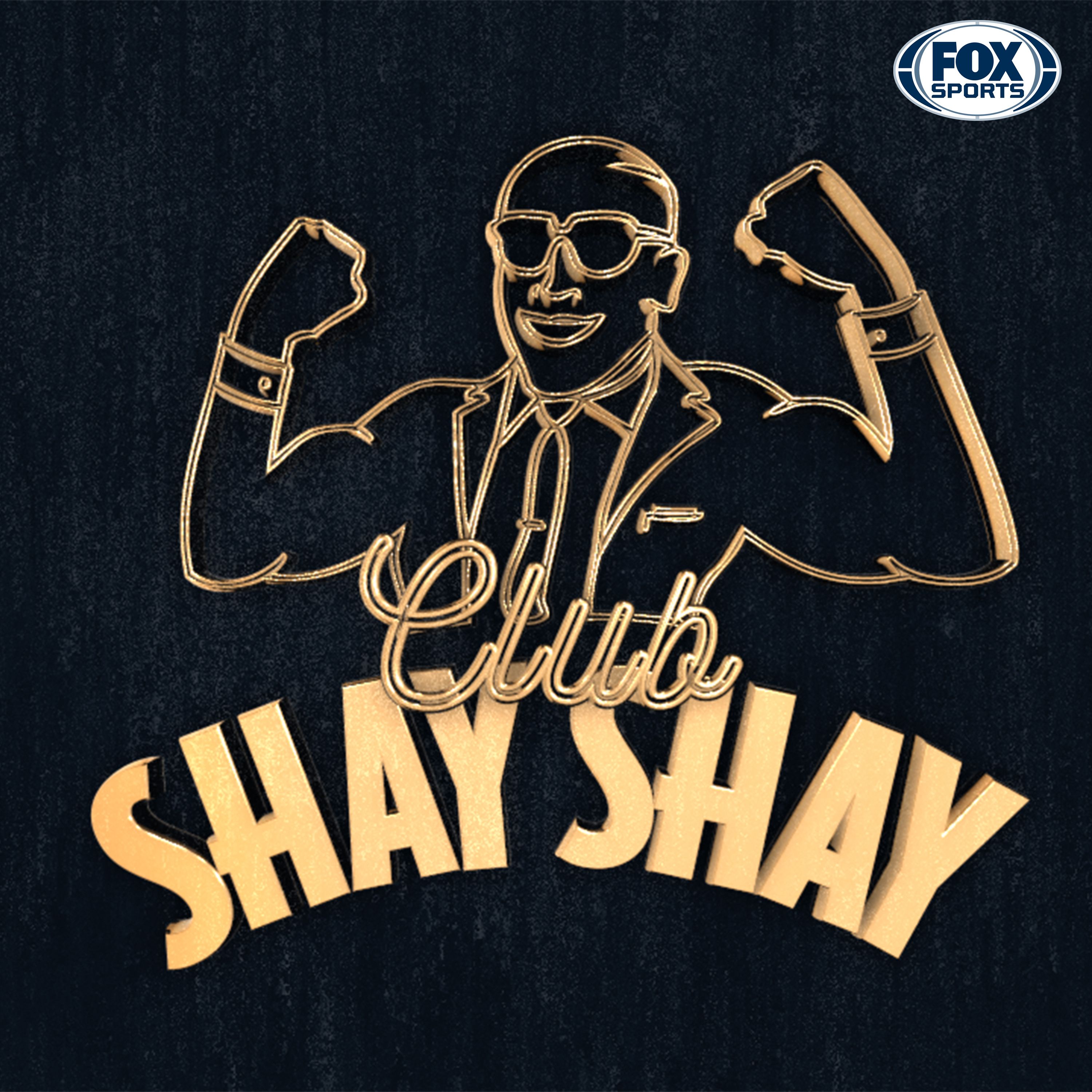 Each week Shannon Sharpe—3x Super Bowl champion, member of the Pro Football Hall of Fame and co-host of Undisputed on FS1—sits down with athletes, celebrities and influencers to break down, analyze and discuss the latest headlines in sports, pop culture and everything in-between.

Oct 26 2020 85 mins
On Episode 6 of Club Shay Shay, Shannon welcomes in baseball Hall of Famer Ken Griffey Jr. “The Kid” shares with Shannon a number of stories from his 22-year professional baseball career, in which he was a 13-time All Star, 10-time Gold Glove Winner and 1997 American League MVP. We hear about what it was like being teammates with “The Big Unit” Randy Johnson, and his plea to the Mariners front office to trade for Pedro Martinez. Shannon also dives into one of the great familial stories sports has ever seen, when Ken Griffey Jr. played alongside his father Ken Griffey Sr. What were some of the challenges in pursuing the same career as his dad? How is Junior guiding his children through their own athletic pursuits? In his answers, you’ll hear about the kinds of personal and professional lessons he learned from his father about hard work and staying humble through it all. Make sure you catch Griffey reading off his 5 all-time favorite baseball players and his personal accounting for how Jackie Robinson impacted the game of baseball. He also dives into the current state of professional baseball, from player salaries to the percentages of black players in the MLB and breaking down the 2020 World Series featuring the Dodgers and Rays. …And of course he talks about the sweetest swing the game has ever seen. Learn more about your ad choices. Visit podcastchoices.com/adchoices

Oct 19 2020 98 mins
On Episode 5 of Club Shay Shay, Shannon speaks with rapper, actor, and activist Ice Cube. Shannon & Ice Cube talk at length about the murder of George Floyd and the protests taking place across the country in support of racial and social justice. Ice Cube also details his own involvement with the movement for civil and human rights, detailing his plan to address racial and economic inequality + prison and police reform with the Contract With Black America (CWBA.world). Ice Cube also revisits his early life and career, growing up in South Central LA and joining N.W.A. and Ruthless Records. He talks about writing “No Vaseline” in 90 minutes, the dynamic between him, Dr. Dre, MC Ren, DJ Yella, and Eazy-E, his musical inspiration, and much more. Shannon & Ice Cube also touch on Ice Cube’s extensive film career, from being sought out as an actor by John Singleton for ‘Boyz N The Hood’ to writing and producing the classic film ‘Friday.’ The conversation is filled with behind-the-scenes stories and gems about the many artistic projects with which Ice Cube has been involved over the years. This episode was recorded on August 13th, 2020. Learn more about your ad choices. Visit podcastchoices.com/adchoices

Oct 12 2020 89 mins
Episode 4 of Club Shay Shay features two-time NBA Champion, 11-Time All Star and Olympic Gold Medal winner Chris Bosh. In an insightful and wide-ranging conversation, Shannon and Chris discuss Chris pursuing a career in music after his retirement from the NBA, producing a track for Gucci Mane, his musical influences, the relationship between hip-hop and the NBA, and much more. Chris also revisits his illustrious basketball career: playing against Kendrick Perkins in high school, attending Georgia Tech under Paul Hewitt, being drafted in the same ’03 class as LeBron James, Carmelo Anthony and Dwayne Wade, becoming an All Star in Toronto, forming the Big 3 and winning two Finals in Miami. He also discusses his 2008 Olympics run & defending against the Lakers in Kobe’s infamous 81-point game. No aspect of Chris’s storied basketball career and burgeoning musical career is left untouched in this captivating and compelling interview. #DoSomethinB4TwoSomethin & Follow Club Shay Shay: https://www.instagram.com/clubshayshay https://twitter.com/clubshayshay https://www.facebook.com/clubshayshay https://www.youtube.com/c/clubshayshay Learn more about your ad choices. Visit podcastchoices.com/adchoices

Oct 05 2020 71 mins
In Episode 3, Shannon welcomes Snoop Dogg — rap icon, actor, entrepreneur, LA Laker superfan and close friend — to Club Shay Shay. Shannon’s conversation with Snoop touches on a wide range of issues: from the protests in support of racial justice taking place across the country to how Snoop’s early music touched on many of the issues being discussed today. Shannon and Snoop take a look back at some of the stories that defined the rap mogul’s illustrious career, peeling back the curtain to working with 2Pac, Dr. Dre and the other artists with which he’s collaborated throughout his longstanding career. Snoop reveals his 5 favorite hip-hop albums of all time, plus his personal favorite LP from his own discography. He also delves into his acting career, including his role alongside Denzel Washington in ‘Training Day.’ Snoop breaks down all the headlines surrounding the Lakers and Clippers, as well as what’s going on in the NFL. He also talks about starting the Snoop Youth Football League, and the many success stories that have come from it. #DoSomethinB4TwoSomethin & Follow Club Shay Shay: https://www.instagram.com/clubshayshay https://twitter.com/clubshayshay https://www.facebook.com/clubshayshay https://www.youtube.com/c/clubshayshay Learn more about your ad choices. Visit podcastchoices.com/adchoices

Sep 29 2020 89 mins
Episode 2 of Club Shay Shay features Shannon's first ever taped conversation with boxing legend Floyd Mayweather Jr. Shannon & Floyd delve deep into Floyd’s historic 50-0 boxing career, from his 1996 Olympic Bronze medal to his 2017 win over Conor McGregor, and the fights along the way that led him to become “arguably the most accomplished boxer of all time.” Floyd discusses the struggles he faced growing up in poverty, and how his drive and will to win in the face of adversity and racial injustice led him to greatness. He also touches on how starting his own promotional company helped him achieve independent financial success, his personal and professional relationships with his father, Floyd Mayweather Sr., his favorite boxers of all time, how he would have fought Sugar Ray Leonard, and much more. #DoSomethinB4TwoSomethin & Follow Club Shay Shay: https://www.instagram.com/clubshayshay https://twitter.com/clubshayshay https://www.facebook.com/clubshayshay https://www.youtube.com/c/clubshayshay Learn more about your ad choices. Visit podcastchoices.com/adchoices

Sep 22 2020 79 mins
Club Shay Shay is officially open! The Hall of Famer takes it back to where it all began, as he welcomes in his brother & “father figure” Sterling Sharpe — the first time the two former NFL stars have had a sit-down interview together. Episode 1 of Club Shay Shay is the definitive history of Shannon and Sterling’s upbringing, as well their respective journeys to prominence. Shannon, 52, and Sterling, 55, grew up in a rural area in South Georgia, in a 1000 square-foot cinder block house, with no running water and a thin, leaky, tin roof. The two brothers discuss growing up together with their older sister, Libby, and their influential grandparents, Barney and Mary Porter. Sterling and Shannon detail their college careers and they both tell their sides of the 1990 NFL Draft, when Shannon was selected by the Denver Broncos in the 7th round (192nd overall). Sterling, the 7th overall pick of the 1988 NFL Draft, played at South Carolina before being drafted by Packers. The 5-time Pro Bowler and 3-time All-Pro played 7 seasons in Green Bay. The two brothers delve into Sterling’s playing days, including his career-ending injury and its aftermath. #DoSomethinB4TwoSomethin & Follow Club Shay Shay: https://www.instagram.com/clubshayshay https://twitter.com/clubshayshay https://www.facebook.com/clubshayshay https://www.youtube.com/c/clubshayshay Learn more about your ad choices. Visit podcastchoices.com/adchoices